Walther WA 2000sniper rifle, left side, with bipod folded over the barrel. 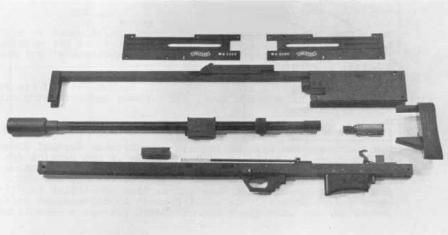 Walther WA-2000 sniper rifle had been developed byCarl WaltherWaffenfabrik (Germany) during late 1970s and early 1980s as a highlyspecialized policesniper rifle. First introduced in 1982, it was later adopted by somespecialized police units in Germany, but rifle was too expensive toachieve widespread sales, and production was fairy limited. It isbelieved that only about 176 WA-2000 rifles were ever made. Unlike manyother sniper rifles of that period, WA-2000was not a conversion of the sporting or hunting rifle, but entirely newdesign with some remarkable features.

The gun is built in the bullpup style, to achievemost compact package while maintaining suitably long barrels. Basicchambering was .300 Winchester Magnum, with effective range well beyond800 meters, with optional chamberings for 7.62mm NATO (.308 win) and7.5mm Swiss. WA-2000 is a semiautomatic rifle, gas operated, withrotating bolt. Short stroke gas piston is located below the barrel. Theheavy, match-grade barrel is fluted and free-floated and is unusuallylocated between two aluminum struts that form the chassis of the rifleand provide mounting points for wooden forend and below and telescopemount and bipod above. The stock(buttplate and cheek rest) and trigger are adjustable. Feed was fromsingle-stack detachable box magazines. WA-2000sniper rifle had no open sights, and had a quick-detachable scopemount. Most common optical sight was a Schmidt & Bender 2.5-10Xvariable power telescope.