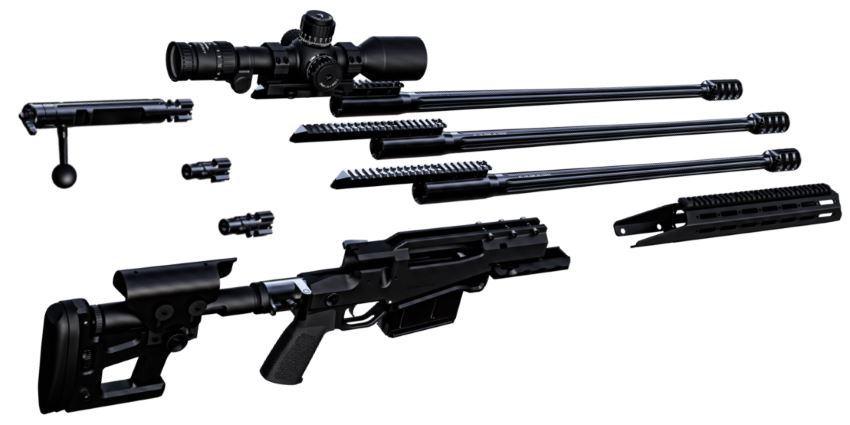 The Ritter & Stark SX-1 Modular Tactical Rifle is a modern sniper weapon, intended for use by police and military personnel at medium and long ranges. Also as a civilian rifle for long range target shooters. This weapon was developed by a group of Russian engineers formerly associated with the design of the successful Orsis T5000 sniper rifle. The project had Austrian investors and was produced in the traditional Austrian gun making center of Ferlach. This fully modular rifle has serious potential for various precision shooting applications.

This weapon is a manually operated, rotary bolt action rifle. It features a bolt with interchangeable bolt heads, each designed for a dedicated cartridge type (.308W, .300WM or .338LM). Barrels are quick-interchangeable. Each barrel is equipped with its own, rigidly attached Picatinny rail to permit a caliber change without the necessity to remount and re-zero optical sights. The chassis type stock is made from aluminum alloy, and features interchangeable magazine well adapters for various magazine types. For example, in 7.62mm / .308 this rifle can be easily configured to feed from AI 10-round magazines or 20-round SR25 or AR10 magazines.

The rifle is equipped with a fully adjustable side folding shoulder stock (with fixtures compatible with various aftermarket AR10 and SR25 stocks, including Magpul PRS) and detachable aluminum alloy forend (which can be had in quad-rail, M-lok or Keymod versions). Other features include a Remington-700 compatible trigger, three position safety on the rear of the bolt, and an Ar-15 compatible pistol grip.