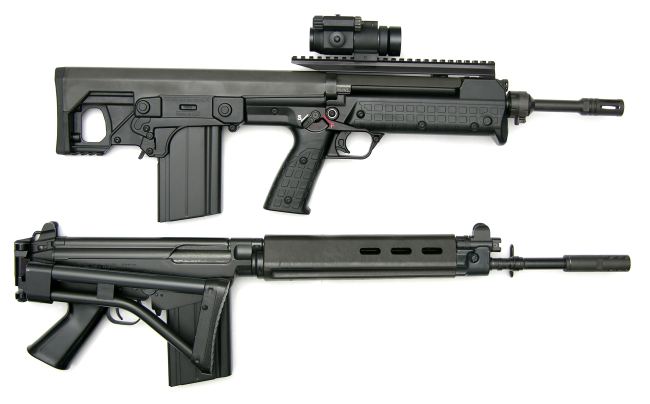 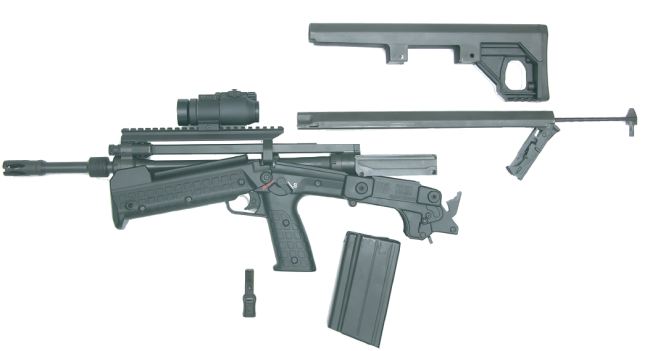 The RFB rifle is a very interesting development of the Kel-tec CNC Industries company, USA. First displayed during ShotShow 2007 expo, this weapon is now (spring 2007) in advanced development; mass production scheduled to early 2008. The RFB is an acronym which stands for Rifle, Forward ejection, Bullpup. It is a brainchild of the George Kellgren, the chief  designer of the Kel-Tec. George Kellgren was long involved into development of advanced bullpup rifles, starting with unorthodox Interdynamics MKR rifle of late seventies. During following decades, Kellgren designed a number of bullpup weapons, featuring first bottom and then forward extraction. During early nineties Kellgren designed a compact bullpup 'personal defense' weapon, designated SUB-16. This was a gas-operated semi-automatic weapon, firing .223 Remington ammunition and featuring forward ejection, with dual tilting extractors / ejectors used to move fired cartridge up from the breech face and push it into ejection chute above the barrel. SUB-16 was a promising and really novel design but the infamous Assault Weapons Ban of 1994 effectively has killed it. Nevertheless, the forward ejection concept was not forgotten, and in around 2003 Kel-tec initiated development of an accurate, semi-automatic rifle with long barrel and compact bullpup layout. In 2005, Kel-tec team began development of the SRT-8, the 7,62×51 semi-automatic sniper rifle. After much experimentation Kel-tec team successfully solved most problems associated with forward ejection system, and in November 2006 the SRT-8 project has changed its name to RFB. Original model designations 'Sniper', 'Hunter' and 'Battle' were also changed to less menacing 'Target', 'Sporter' and 'Carbine' respectively. As of now (April 2007), Kel-tec is tooling up for first pre-production batch of RFB. At the same time, Kel-tec is investigating smaller- versions of the same design, adapted to 'intermediate' calibers such as 7,62×39, 5,56×45 / .223, 6,5 Grendel or 6,8×43 Rem SPC. This weapon will be significantly lighter and more compact, retaining same ambidexterity and high barrel length to overall length ratio of the RFB.
It must be noted that at the present time the only fully ambidextrous bullpup rifle with forward ejection is the Belgian FN F2000 assault rifle and its civilian derivative FS2000, both available only in 5,56mm / .223 caliber.
The key advantage of the RFB is that it provides a compact and fully ambidextrous package, combined with increased barrel length, thus allowing for increasing ballistic performance using same cartridge (as compared to rifles with traditional layout).

Kel-tec RFB rifle is gas-operated, using short-stroke gas piston located above the barrel. Gas system is fitted with manual gas regulator, located at the front of gas block. Bolt system is somewhat unusual, as the long bolt carrier has an inverted U-shaped cross-section, and runs above the barrel and ejection chute. The bolt is hinged to the rear of the carrier. Locking is achieved by tipping the rear of the bolt down, to engage locking recesses in barrel extension. Forward ejection system includes dual extractors / ejectors, pivotally attached at either side of the bolt. Upon final stage of the bolt opening movement, those extractors are cammed up, to bring the fired cartridge above the barrel and in line with ejection chute above it. Upon closing movement of the bolt, it strips the fresh cartridge from magazine and feeds it into the chamber, simultaneously pushing the fired case forward and into ejection chute. Upon final closing movement of the bolt ejectors are cammed down to release fired case and to grip on the base of the fresh cartridge in the chamber. Fired cases then remain in the ejection chute until manually shaken out of it or pushed out by subsequent cases. Special provisions are made to avoid empty cases bounced back from chute and into receiver. Bolt system features dual return spring installed on captive spring guides. Upon disassembly, bolt group along with recoil springs is removed from the gun as one unit. Charging handle is reciprocating and can be installed on either side of the gun.
The rest of the gun is mounted on the barrel, which forms the backbone of the weapon, using four captive cross-pins. Forend, pistol grip / trigger pack / magazine housing and receiver cover / buttstock are made from impact-resistant polymer. Basic disassembly of the RFB requires no special tools other than a cartridge or other pointed object, which is used to push out connecting pins.
Firing unit is hammer-fired, and features an interesting system which provides consistent and crisp trigger pull. In essence, this system keeps the sear next to the trigger, and the necessary long linkage is located between sear and hammer, not impairing the trigger pull. The trigger is fully adjustable. Manual safety levers are located above pistol grip at either side of the gun. Feed is using "metric" FN FAL magazines, which are readily available on the market. There are no open / iron sights as standard on RFB rifles; instead, a Picatinny-type rail is rigidly attached to the barrel. This rail will accept any sighting equipment with appropriate mounting interface.

Special thanks to George Kellgren for invaluable information and images.