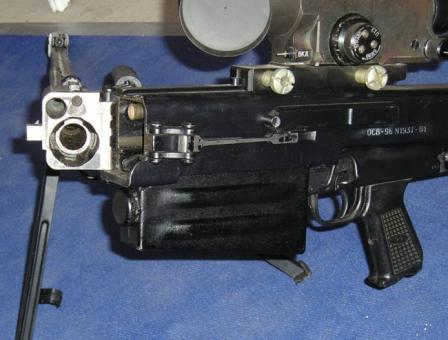 12.7mm OSV-96 rifle with barrel folded half-way to the right, exposing barrel breech area and gas tube exit. Note the barel clamp / lock on the receiver above the magazine.

The OSV-96 12.7mm sniper rifle began its life during early 1990s as V-94. Designed and developed at famous KBP (Instrument Design Bureau) in Tula. During following years rifle incorporated several improvements, and was eventually redesignated as OSV-96. It is offered for export and local buyers, and is in use by Russian Army and Internal Affairs Ministry (MVD) special units.

The OSV-96 is a gas operated, rotating bolt semiautomatic rifle. The bolt locks directly to the barrel extension, so it is possible to made a hinge between the barrel and receiver. When not in use, the OSV-96 could be "folded" around this hinge to save the space, since the rifle is quite long. This feature also allows for quick transformation from folded into battle-ready position. To 'fold up' the rifle user must lock the bolt back by cocking it and engaging the bolt catch, then release large barrel lock on the left side of the receiver. The long barrel is free-floated, and fitted with long combination muzzle brake – flash hider. The integral folding bipods are mounted on the special console, attached to the base of the barrel, next to the hinge point. The polymer buttstock is fitted with rubber recoil pad. OSV-96 is usually fitted with some sort of telescope or nightvision sight, but also carries a set of back-up iron sights.

The exact accuracy data of the OSV-96 is not yet published, but, apparently, it is enough for intended work as a anti-materiel rifle or mid-range counter-sniper rifle.