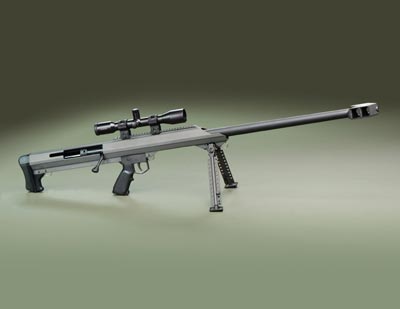 The Barrett Model 99 "Big Shot" rifle was first introduced in 1999 and is a latest development of the Barrett Firearms Co (USA), known worldwide by its earlier .50 caliber rifles – semi-automatic M82A1 and bolt-action M95. The M99 is positioned on the market as a inexpensive yet extremely accurate .50 caliber sniper / special applications rifle. The M99 is available in two basically similar modifications,M99 and M99-1, latter being fitted with shorter barrel. M99 is intended as along range target or sniper rifle for applications where rate of fire is of less value than the accuracy. M99-1 is better suited for urban operations (like counter-sniper operations or explosive ordnance disposal) where ranges are relatively shorter but powerful .50 caliber bullet still required to do the job.Barrett M99 is also used for long range competition, and it was used in 2001 to set aworld record in 1000 yards .50BMG competition, with smallest recorded group of 5 shots being only 4.09 inch (104 mm) small.

Being externally similar to earlier Barrett M95 rifle (less magazine), the M99 in fact differs from it in many aspects. First, it is a single shot weapon, and after each shot a fresh cartridge must be manually loaded into the receiver opening (spent case is ejected automatically when bolt is opened). Second, the bolt has multiple lugs instead of three lugs on M95 bolt. Third, the one piece receiver is made from aluminum alloy, instead of the two-part stamped steel receivers on M82 and M95. The heavy fluted barrels are equipped with large and effective muzzle brakes. M99 rifles have no open sights installed by default, and a M1913 Picatinny (modified Weaver) rail is formed as an integral part of the receiver, allowing for wide variety of sighting devices to be easily installed. M99 rifles are equipped with the detachable folding bipod with adjustable legs. The trigger group along with the pistol handle is attached to the receiver by the simple push-pins and could be quickly detached for cleaning and maintenance.