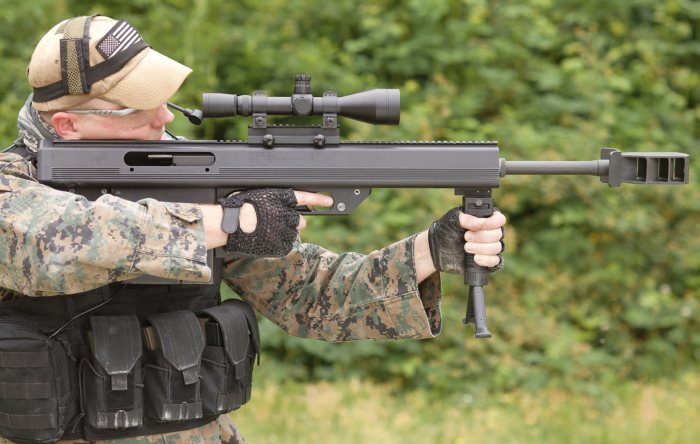 MD 50 sniper rifle (formerly known as Leader 50) is designed by Charles St George, prominent small arms designer who previously developed semi-automatic rifles such as Leader T2 and Bushmaster M17S. MD 50 (Leader 50) is manufactured by US-based company Micor Defense. Leader 50 sniper rifle is one of the lightest and most compact fifty caliber rifles on the market, and, if required, can be more or less comfortably fired from the shoulder.

MD 50 sniper rifle is gas operated, semi-automatic weapon of bullpup layout. Its receiver is made of extruded aluminum alloy. Gas system of the MD rifle features three-position gas regulator and annular short stroke gas piston, located around the barrel. The bolt group is of original and innovative design. Rotary bolt has triangular head with three frontal locking lugs – an idea, pioneered by St George in his Leader T2 rifle three decades ago. The bolt carrier is unusually short and light, which leads to a relatively short receiver and decreased felt recoil. To further decrease the recoil, barrel is equipped with effective muzzle brake. Rifle is fed from detachable box magazines with 10-round capacity, ejection is to the right. Sighting means are provided via long integral Picatinny rail above the receiver, which could host variety of sights – daytime telescopic, night vision / IR and / or back-up iron sights. Accessories such as bipod or grip-pod can be installed on the additional rail located below the forend.

Special thanks to Chares St George for his invaluable help