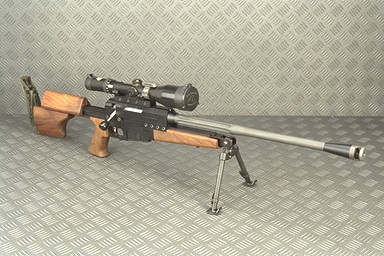 Ultima Ratio rifles are made by PGM Precision company in France. Some UR 'Intervention' and 'Commando' (shortened variants) of these rifles are known to be adopted by French Military as a replacement for FR F1 and FR F2.

UR rifles utilise 'metallic skeleton' design with aluminum alloy receiver and free floating precision made barrel, fitted with huge muzzle brake/compensator. Bolt locks into receiver with three forward-located lugs, and has overpressure vents to secure the shooter from powder gases in the case of the cartridge case rupture. Barrels are quickly detachable/intergangeable, and may be fitted with silencer to be used with subsonic ammunition.

The UR series rifles are known as a top-quality performers. As an interesting point, these rifles are marketed in the USA by FN Manufacturing, and withouth any mentions of PGM Precision. probably, FN Herstal simply bought PGM to extent its product range (but it's my own speculation, nothing more!).