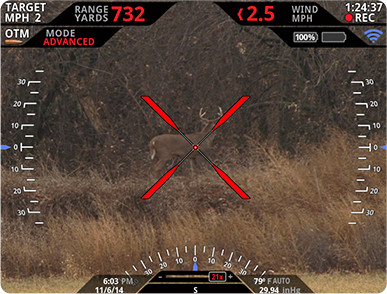 A line of hunting and sniper rifles, designed and sold by American company Tracking Point Inc under the brand “Precision Guided Firearms” is one of most innovative approaches in blending well-matured small arms technologies with rapidly evolving state-of-the-art computer applications such as image processing and recognition, ballistic calculations, visual data recording and transmission etc. Unlike previous computerized sighting systems for small arms, Tracking Point has integrated computer into the most important part of the shooting process – making the shoot exactly when the rifle is positioned as it should be to hit its intended target. Many previous systems allow automatic calculation of point of aim depending on actual distance to the target (measured by a laser rangefinder), atmospheric conditions and ballistic properties of the specific cartridge and rifle combination, preset by user. However, it is still up to the shooter to properly align the calculated point of impact with his desired point of aim, and pull the trigger at this specific moment. To solve the problem of the inherent instability of the human hands that hold the rifle, especially when shooting from unsupported position or under stress, Tracking Point used several technologies previously used in combat aircrafts. Some of these key technologies are image recognition and automated target tracking, plus use of a human operator input only as a general permission to release ordnance (or fire a shot, in this case), with actual moment of release or shot being calculated by a computer, based on a real-time ballistic solution against an automatically tracked target.

In general, shooting of any rifle (Precision Guided Firearm) by Tracking Point in its most automatic mode involves following steps:

–          Place the tag marker (dot shown on the display) over the desired point of impact on the target, and press the “tag” button at the front of the trigger guard. This forces built-in computer to do several steps, including: measure actual distance to the target, calculate ballistic solution based on the pre-programmed rifle and ammunition data, and to start automatically tracking the target within the field of view of the sight. This automatic tracking aligns visual tag mark on the screen with same spot of the tracked target, regardless of minute movements of the rifle as well as target’s own movements

–          Align the aiming reticle (which designates calculated point of impact) with the visually tagged spot of the target. Once the aiming reticle is properly aligned with the tagged target, reticle color is changed, indicating that the rifle is actually “on target” and can be fired with high chances to hit intended spot.

–          Pull and hold the “guided trigger”. This final user input actually serves as “permission to engage” for the system. As long as the trigger is pulled, computer dynamically and in real-time calculates relative positions of the tagged spot of the target with predicted point of impact, and automatically fires the gun as soon as these two calculated spots are converged.

Use of the integrated computer allows for dynamic tracking of moving targets, with real-time adjustments of the tag and calculated point of impact, which greatly simplifies shooting at real-life targets such as hinting game or enemy personnel, which rarely remains static for any noticeable amount of time. Other variables automatically taken into account by computer are external temperature, air pressure, ballistic properties of the ammunition and rifle, horizontal angle of rifle and its cant. Also, built-in laser barrel reference system ensures that sight would hold its factory-set “zero” regardless of how often sight was taken off and re-installed on the same rifle, and despite minor changes in the barrel due to temperature changes.

And as if it’s not enough for successful precision shooting, this highly integrated system offers much more. Thanks to Wi-Fi interface, built into its core computer, any Precision Guided Firearm can stream real-time sight picture (with all relevant computed information) to an external device, such as smartphone, handheld computer or digital glasses. This streamed video information can be viewed by others (i.e. instructor or spotter), stored for later review, or used for remote (over-the-corner) aiming and shooting of the gun. Also, at least in theory, and provided sufficient computing power and software upgrades, same system could be used to for multi-target “tag-tag shoot-shoot” scenarios, where operator can tag several targets within his point of view (i.e. small group of terrorists clustering together) and then proceed to move through tagged targets while pressing and holding the trigger, with rifle automatically shooting at each selected target as soon as the aim is true. Alternatively, if single target requires several hits, system can automatically restore tag to the same location over the target after each shot.

All in all, this integrated system allows for quantum leap in real-life shooting performance, especially at medium and long distances and against moving targets. It also allows for simpler engagement modes, where electronic sight is used to calculate ballistic solution to selected target but target “tagging” and “guided” trigger are not used.

Precision Guided Firearm by Tracking Point is an integrated system, which, in minimal configuration, consists of a custom-built rifle with electronically controlled “guided” trigger and battery power pack integrated into the shoulder stock of semi-automatic rifle or into the sight itself for bolt action rifles. The core of the system is an electronic sight, which is mechanically attached to the top accessory rail of the rifle, and connected via the wiring to the trigger unit and battery pack. A the present time, Tracking Point rifles are pre-programmed for just a few factory-selected types of (match grade) ammunition, but this may change in future.

The sight unit is a proprietary system, which consists of reprogrammable microcomputer, input video camera (image sensor) with objective lenses, built-in color display and an array of sensors that measure environmental conditions (temperature and pressure), position and movement of the rifle (compass, angle and cant sensors, accelerometers), range to the target (laser range finder), and relative alignment of the sight and barrel (laser). Additional modules include external interfaces (wired and wireless) used to upload new software and data to the sight and to transmit visual data to external devices such as virtual glasses, smartphone or iPad.

Computer performs all the calculations necessary to recognize and track the tagged target, calculate ballistic solution in real time, display all necessary info to the shooter and control the trigger in the “guided” firing mode.