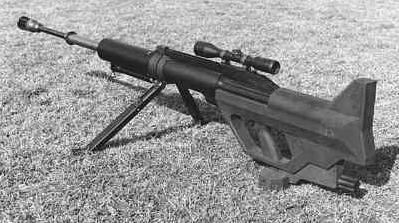 IWS 2000 is wery formidable weapon. It fires 20 gramm (308 grains) tungsten dart (fleschette) with muzzle velocity of 1450 meters per second (4750 fps). At 1000 meters this projectile will penetrate a 40 mm of RHA (rollded homogenous steel armour) and will result in serious secondary fragmentation effect behind the armour. That said, it will penetrate two walls of any modern APC at one kilometer range. The trajectory is very flat and does not rise higher than 800 mm above the line of sight when fired to 1000 meters.The cartridge is of somewhat original design, and has plastic case with steel head and base. The projectile is concealed within a plastic sabot.

The rifle itself also is very interesting. Firs, it uses rare long-recoil system, when barrel recoils along with the bolt for significant lenght. At the end of the recoil, bolt unlocks from the barrel by rotating and held back, and barrel returns into forward position, ejecting a spent case. Bolt stays at the rearmost position while barrel moves, and then also moves forward, chambering a new round from the side-mounted magazine and finally locking rigidly to the barrel. This design allows for better recoil disttibution over a longer period of time. Huge muzzle brake also contributes to recoil control, so felt recoil of the IWS 2000 is descibed as a similar to the large-caliber sporting rifle. Five round detachable box magazine is located at the right side of the receiver and inclined down for about 45 degrees. The smooth-bore barrel can be easily detached, so rifle can be carried disassembled into two man-portable packs. Plastics are used where possible to reduce the weight of the gun. IWS 2000 is equipped with bipod and a rear leg under the buttstock. It is also equipped with 10X telescope as a standard.

This is probably the most powerful modern anti-materiel rifle, and while it is not a true "sniper" rifle, it is well worth mentioning. The future of this design is also unclear, sice it requires ammunition of a brand new type.