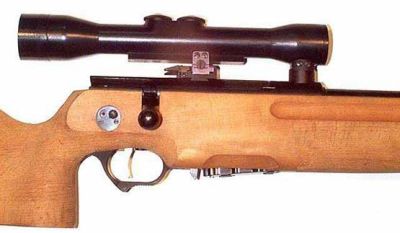 Not too much known about this quite rare rifle. It was manufactured in 1980s for East Germany Police and Airport Security units. It is based on small-bore match rifle, but chambered for somewhat odd (for the sniper use) cartridge, 5.45x39mm, which intended for use in AK-74 Kalashnikov assault rifles. The accuracy of the rifle is not too great, say, 2 or so MOA with good ammo, and even worse with standart miliotary issue ammo.

The SSG-82 featured rotating bolt action with 4 lugs that locks into the receiver. The barrel is cold hammer forged. Gun is fed from detachable box magazine that holds 5 rounds. Standart scope is Zeiss 4X fixed power. The stock is made from wood and is ajustable for lenght of pull with rubber inserts.