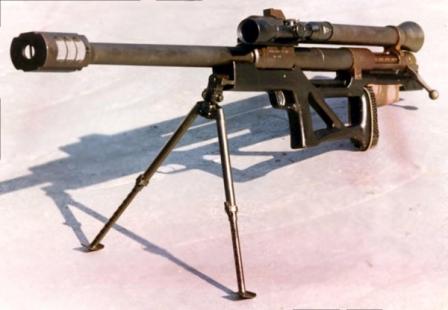 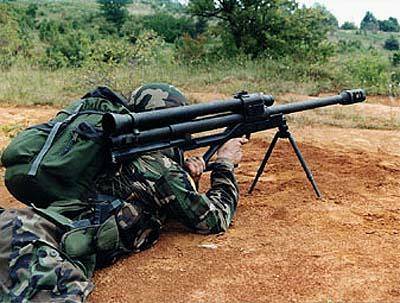 RT-20 in firing position. Anyone can wonder if the backblast from the reactive counter-recoil tube (above the barrel) won't tear off the shooters' backpack at the moment of fire.

The RT-20 was developed in the Croatia in the mid-1990s as a pure anti-materiel and anti-armor rifle. The RT-20 name means "Rucni Top, 20mm", that is "Hand Canon, 20mm". It is one of the most powerful anti-materiel rifles fielded by any army in the world today – the only others design roughly comparable to this monster in the terms of the caliber and effectiveness are the South-African NTW-20 rifle and the Finnish Helenius APH-20 (will be posted at this site later). The RT-20 had been successfully deployed during the war in the former Yugoslavia in the second half of the 1990s. It is manufacture by the Croatian company RH-Alan and is officially adopted by Croatian army.

The RT-20 is built around the very powerful 20mm ammunition, originally developed for Hispano Suiza HS404 anti-aircraft round of WW2 vintage. This ammunition is still used in anti-aircraft guns in some countries for AA guns and generally available in HE (explosive) and AP (anti-armor) loadings, both suitable for anti-material roles. The AP loading also can be successfully used against infantry fighting vehicles and armored personnel carriers. The 20x110mm round fires the 130 gram (2000 grains) projectile at muzzle velocities about 850 meters per second. This results in high terminal effectiveness but also imposes a serious problem of excessive recoil forces. The 20mm Hispano round generates about 4 times more recoil when fired from 20 kg rifle, compared to .50BMG (12.7x99mm) round, fired from 10kg rifle (such as Barrett M95). To make the recoil more or less bearable by the average shooter, the Croatian designers developed a quite interesting counter-recoil system, that uses a reactive principle. The system consist of the large reactive tube, located above the barrel. The forward end of this tube is connected to the barrel at about its middle point. The rear part of the tube forms the reactive nozzle. When gun is fired, some hot powder gases are fed from the barrel to the reactive tube and back, forming a back-blast with reactive force that cats again the recoil forces. The large muzzle brake further helps to decrease the recoil. This reactive system, once popular in large caliber (about 80 – 100 mm and bigger) recoilless rifles, almost never had been used in such relatively small weapons. This system, while effective in counter-recoil, has some disadvantages, First, it requires some special firing techniques for shooter to avoid damage from backblast. Second, due to the same reason, it hardly can be fired in confined spaces like the small building rooms, and the RT-20 cannot be fired with structures, such as walls, in close proximity to the rear.. Third, the backblast can create additional spots for enemy, giving away the position of the rifle.

The rest of the system is relatively simple. The rotating bolt locks the barrel by three massive lugs. RT-20 is a single-shot rifle and thus have no magazine. The shoulder rest and the pistol handle with trigger are located under the barrel, so rifle is obviously a bullpup. The RT-20 has no open sights, instead it had an telescope optical sight, mounted on the barrel and offset to the left.

Special thanks to Romeo Streinger for pictures and info.