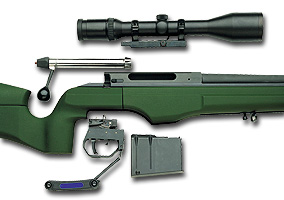 The TRG sniper rifles were developed by Finnish company Sako. Original rifles, TRG-21 and TRG-41, were both built around Sako TRG bolt action, with rotating bolt having three massive lugs at the front. Same action is used in Sako TRG-S hunting rifles. Other key features of the TRG sniper rifles are aluminium bedded, composite stocks with ajustable butts and chheekpieces, heavy, match grade barrels and ajustable triggers. The main difference between TRG-21 and TRG-41 is in ammunition used – the TRG-21 is designed to fire standard 7.62mm NATO (.308win) ammunition, and has standard lenght action, while the TRG-41 is designed to fire more powerful .300 Win.mag and .338 Lapua ammunition, and has large (magnum-size) action and longer barrel with muzzle brake. In all other respects both rifles are similar.

The TRG-22 and TRG-42 are upgraded versions of the TRG-21 and TRG-41 rifles, respectively, with modified stocks and some internal changes. New stocks have slightly different contours and integral folding bipods at the front.

Sako sniper rifles are known by their world-class accuracy and strenght, and are used by many European police and counter-terror forces.