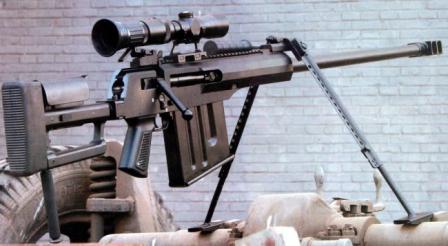 The AMR-2 anti-materiel / sniper rifle was developed by China South Industries Group. Apparently, it is one of several designs that are tested by PLA in search for a modern anti-materiel rifle. It is possible that this rifle will be also offered for export.

TheAMR-2 anti-materiel / sniper rifle is manually operated, bolt action rifle with conventional rotary bolt locking. Bolt has dual frontal locking lugs. Free-floating barrel is equipped with the massive muzzlebrake. It is normally fitted with side-folding buttstock with adjustable cheekpiece, folding bipod, and a detachable rear monopod under the butt. Feed is from detachable box magazines. Rifle is fitted with iron (open)sights on folding bases, and a Picatinny-type rail is provided for installation of the telescopic or night sights.