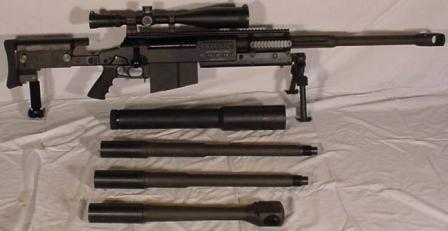 The concept, for what later became the "Nemesis" large caliber sniper rifle, was devised in 2001 by two former military, the retired US Marine Corps officer, James Owens and the Swiss Chris Movigliatti. First prototype was tested only 3 months after the design inception. In 2003, first production batch of rifles was made by AMSD, a Swiss company, highly specialized in the design of precision military light armament. The new weapon was officially christened as the OM 50 Nemesis (OM standing for names of the designers, 50 for caliber and Nemesis for the ancient Greek goddess of justice and vengeance).
The prime niche for this new weapon is precision anti-material shooting for military and police applications. The weapon can be configured as well for urban warfare as for long range target operations. A civilian version exists also for long range precision shooting. For this reason, the OM 50 Nemesis rifle features a fully modular design with three basic versions, known as Mk I, MK II and Mk III respectively. Each of these versions can be fitted with a variety of quick-change barrels, of different profiles and lengths, as well as with different add-ons (high efficiency muzzle brakes or detachable silencers / sound moderators). Barrel lengths vary from 381 mm / 15 inches for short range (urban) shooting against hardened targets and up to 838 mm / 33 inches for accurate long-range shooting. Barrel change can be accomplished in the field in less than 2 minutes, using a DIN screwdriver.

All OM 50 Nemesis rifles are built around the same aviation grade aluminum-alloy receiver and (steel) bolt group with a manually operated, rotary bolt. Bolt heads lock directly into the barrel extension with three radial lugs, relieving receiver from most of the stress and providing constant headspace, needing no adjustment. Barrels are free-floated, and are held in the receiver by a set of cross-screws. Trigger is of two-stage type, fully adjustable. The forend is attached to the receiver. Top of receiver is provided with one or more Picatinny type rails which can accept a variety of telescope and other accessories (laser; Night Sight; light). The top rail can be delivered with a 20 MOA to 40 MOA angle.
The OM 50 Nemesis Mk I has a manual feeding block, and features an adjustable fixed buttstock. It can be upgraded to the OM 50 Mk II configuration by taking out the manual feeding block and replacing/adding (1) the 5-round detachable box magazine, (2) the side-folding adjustable buttstock, (3) the folding bipod (attached to forend) and (4) the rear folding monopod (attached to the buttstock). Further upgrade, which includes extended forend with additional Picatinny rails, constitutes the OM 50 Mk III configuration. Depending on the mission, a particular version of the OM 50 Nemesis can be easily converted by the operator to another (up and down), with installation or deinstallation of necessary parts and modules.

Accuracy of the OM 50 rifles in field (real-life) conditions is described as 0,5 MOA at 300 meters and sub 1 MOA at 1000 meters; in testing, while fired by an experienced USMC sniper, OM 50 rifle shot 6×5 cm (about 2 1/2 inch) groups at 1000 yards (911 meters), which accounts for sub 0,25 MOA accuracy. The gun has already been commissioned with various police and military special operation forces.

Special thanks to Christian R. Vermeulen (Switzerland) for information