This probably is the image of the M82 – the earliest Barrett .50 caliber rifle. 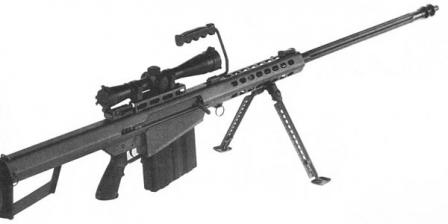 M82A3 rifle, also known as M82A1M, latest version developed for US Army. Note the long Picatinny rail on the top of the receiver.

The Barrett Firearms company was founded by the Ronnie Barrett for a single purpose of building semi-automatic rifles chambered for powerful .50BMG ammunition, originally developed for and used in  Browning M2HB heavy machine guns. Barrett began his work in early 1980s and first working rifles were available in 1982, hence the designation M82. Barrett continued to develop his rifle through 1980s, and developed improved M82A1 rifle by 1986. The first real success was the purchase of about 100 M82A1 rifles by the Sweden Army in 1989. Major success followed in 1990 – 1991, when US Military purchased numbers of the M82A1 during the operations Desert Shield and Desert Storm in Kuwait and Iraq. About 125 rifles were initially bought by US Marine Corps, orders from US Army and Air Force followed soon. The M82A1 isknown for US Military as the SASR – "Special Applications Scoped Rifle",and it was and still is used as an anti-materiel weapon and EOD (explosive ordnance disposal) tool. The long effective range along with high energy and availability of highly effective ammunition such as API and Raufoss M213 allows for effective operations against targets like radar cabins, trucks, parked aircrafts and soon. M82 also can be used to defeat enemy snipers or criminals from stand off range or when targets are behind the cover, but the anti-personnel work is not a major application for Barrett M82 (or any other .50BMG rifle, for that matter).

Further development led to the M82A2 bull-pup rifle (1987), which was designed to be fired from the shoulder, but did not succeed, and was soon dropped from production. The M82A2 was obviously designed as a cheap anti-helicopter weapon,suitable for use against highly mobile targets when fired from the shoulder. The latest derivative of the M82 family is the M82A1M rifle, adopted by USMC as the M82A3 SASR and bought in significant numbers. This rifle differs from M82A1 in that it have a full length Picatinny rail that allows a hugevariety of scopes and sighting devices to be mounted on the rifle. Other changes are addition of the rear monopod, slightly lightened mechanism and detachablebipod and muzzle brake. The Barrett M82 rifles were bought by various military and police countries from at least 30 countries, such as Belgium, Denmark, Finland, France, Greece,Italy, Mexico, Portugal, Saudi Arabia, Spain, Sweden, Turkey, UK, USA and others. The M82 also is widely used for civilian .50 caliber long range shooting competitions, being fired accurately out to 1000 yards (911 meters) and evenfurther.

As a side note I must point out that the Barrett M82A1 rifle was recently(2002) used as a platform for experimental OSW (Objective Sniper Weapon)prototype. The M82A1 rifle was fitted with shorter barrel of 25mm caliber, and fired low-velocity high explosive shells developed for 25mm OCSW automatic grenade launcher. The experimental OSW showed an increased effectiveness against various targets but the recoil was beyond the human limitations.

The M82 is a recoil operated, short barrel stroke, semi-automatic firearm.When gun is fired, barrel initially recoils for a short distance (about an inch- 25 mm) being securely locked by the rotating bolt. After the short travel a post on the bolt, engaged in the curved cam track in the receiver, turns bolt to unlock it from the barrel. As soon as the bolt unlocks, the accelerator arm strikes it back,transferring some part of the recoil energy of the barrel to the bolt to achieve the reliable cycling. Then barrel is stopped and the bolt continues back, to extract and eject a spent case. On its return stroke bolt strips the fresh cartridge from the box magazine and feeds it into the chamber and finally locks itself to the barrel. The striker also is cocked on the return stroke of the bolt. The gun is fed from the large detachable box magazines, that hold 10 rounds.

The receiver is made from two parts (upper and lower), stamped from sheet steel and connected by cross-pins. Heavy barrel is fluted to improve heat dissipation and save weight, and fitted with large and effective reactive muzzlebrake. On the earlier models the muzzle brakes were of round cross-section,latter M82 rifles are equipped with two chamber brakes of rectangular cross-section. M82A1 rifles are fitted with scope mount and a folding backup iron sights. M82 rifles are often equipped with Leupold M series 10X telescope sights. The M82A1M (USMC M82A3) rifles have long Picatinny accessory rail mounted on the top of the receiver, that can accept wide variety of scopes, day or night. Every M82 rifle is equipped with folding carrying handle and with a folding bipod (both are detachable on M82A3). M82A3 also fitted with the detachable rear monopod under the butt. The buttpad is fitted with soft recoil pad to further decrease the felt recoil. M82A1 and M82A3 rifles could be mounted on the M3 or M122 infantry tripods (originally intended for machine guns) or on vehicles using special Barrett soft-mount. M82A1 can be fitted with carry sling but according to those who carried it in the field, M82 is way too uncomfortable to be carried on sling due to excessive length and heavy weight. It is usually carried in special carry soft or hard case.