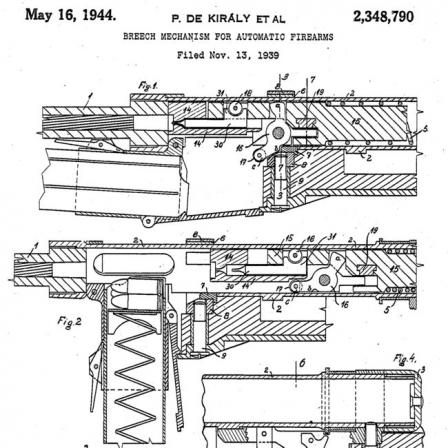 Kiraly’s patent for his delayedblowback action used in 39M and 43M submachine guns.

The famous Hungarian arms designer Pal Kiraly developed his military-type 39M (39 Minta – model of [19]39) submachine gun at Hungarian Danuvia arms factory between 1937 and 1939. The 39M submachine gun bears more than passing resemblance to the Swiss-made SIG MKMS (M1934)submachine gun, which is not surprising, considering the fact that Kiraly worked in Switzerland at SIG factory during 1920s and 1930s, before returning to Hungary just prior to WW2. The 39M submachine gun represented a carbine-type weapon, being relatively large and heavy, so, in 1942-43 Kiraly also developed a more compact weapon along the same concept and delayed blowback action of his own design, known as 43M. Despite internal similarities and same caliber, the magazines of 39M and 43M were not interchangeable due to different feed angle on the 43M SMG. It must be noted that production of both submachine guns was somewhat limited, despite the fact that both were ranked among most powerful weapons in its class, thanks to long barrels and powerful 9×25 Mauser ammunition(muzzle velocity 450m/s, bullet weight 8.3 gram, muzzle energy 840 Joules)

The 39M submachine gun uses delayed blowback action designed by PalKiraly. In this system, bolt consists of two parts, with pivoting lever attached to the forward part (bolt head). When in battery, the bottom hand of the lever is resting against the receiver, and the upper rests against the rear part of the bolt (bolt body). Upon discharge, movement of the bolt head forces the lever to rotate back, thus speeding up the bolt body and slowing down the initial opening of the bolt head. Once the lever is fully pivoted, both parts of the bolt can recoil together freely against the return spring, to complete the firing and reloading cycle. Firing is from open bolt, in full automatic mode or single shots. Feed is from box magazines; magazine housing can be folded forward to save the space, with magazine resting inside the hollow stock,below the barrel. Stock is made of wood, the 43M submachine gun also having separate pistol grip and down-folding steel buttstock. sights are of open type,adjustable for range between 50 and 600 meters.