PP-2000 submachine gun as displayed at Interpolytech-2004 exhibition in Moscow; note spare magazine inserted at the rear of the gun to serve as a shoulder support.
photo by Gleb Androsov 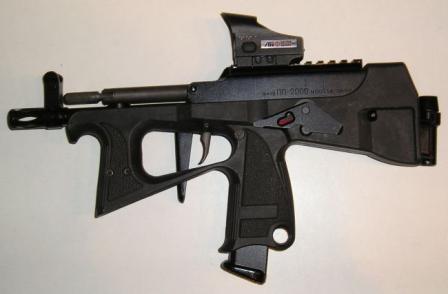 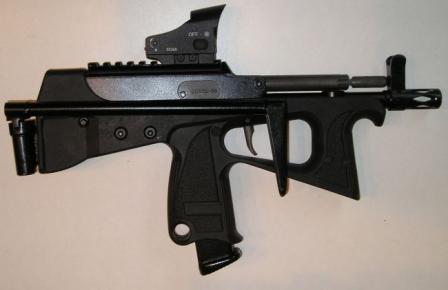 The PP-2000 submachine gun is the latest development of the famous Instrument Design Bureau (KBP) from Tula, Russia. It has been first displayed on public in 2004, although the patent for its layout has been filed in 2001 and issued in 2003. Today it is already in use with some Law Enforcement (police and state security) units of Russian Federation.
The main “niche” for PP-2000 is a personal defense weapon for non-infantry military personnel, as well as close combat weapon for special forces and special law enforcement teams. As such, it is a compact weapon with as few parts as possible for enhanced reliability, simplified maintenance and low cost. Also, it is designed to fire any standard 9x19mm “ball” (FMJ) ammunition, as well as +P+ class 7N31 armor piercing ammunition of Russian origin. When loaded with 7N31 ammo, PP-2000 offers enhanced penetration against body armor, while maintaining stopping power against “soft targets”, which is believed to be superior to foreign small-caliber rivals, like 5.7mm FN P90 or 4.6mm H&K MP-7.

The PP-2000 is a conventional blowback operated submachine gun, and it is fired from closed bolt for enhanced accuracy. The bolt is telescoped around the rear part of the barrel; front part of the bolt is exposed above the barrel and is fitted with side-folding charging handle. The receiver / housing is made from polymer as a single unit with pistol grip and trigger guard. Trigger guard is enlarged and its front part is shaped to provide front hand grip. The magazine housing is located inside the pistol grip; Housing for spare magazine is located at the rear end of the receiver, and, when inserted, spare magazine is used as a crude shoulder support (buttstock), although and optional removable side-folding butt is currently offered with the gun. Safety / fire mode selector is conveniently located at the left side of the receiver, above the pistol grip. PP2000 is fitted with fixed open sights, and a Picatinny-type acessory rail is provided on the top of the receiver cover. This weapon is most often encountered with various types of red-dot sights, best suitable for close combat. Special mount permits intallation of the tactical light or laser aiming module below the front part of the enlarged trigger guard.