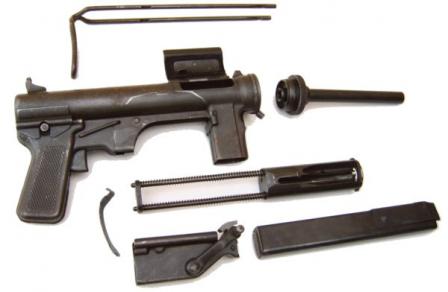 The M3 submachine gun, also known as Grease gun, was developed as a cheaper war-time alternative to famous Thompson M1 and M1928 submachine guns.The basic requirements were set by US Ordnance Corps in February, 1941. The George Hyde and Frederick Sampson, working together at Inland Division ofgeneral Motors Corp developed a prototype, which was designated as T20. This wasa very simple weapon, made mostly from steel stampings. In November 1942 T20 was tested against several other prototypes, and was found superior to all other contestants. Late in 1942 the T20 was recommended for adoption, which followed in 1943. Combat use of a newly adopted M3 submachine gun showed some problematic points in design, most notably in cocking mechanism. The problems were solved by elimination of this unit, which was done in 1944. The further simplified weapon received designation M3A1, and served with US Armed forces through the later part of WW2, Korean and Vietnam wars. M3A1 was issued to US tank crews up until 1980s.

M3 submachine gun is full-automatic only, blowback operated firearm that fired from open bolt. The receiver is made from steel stampings. M3 featured spring-loaded ejection port cover (which also also act as safety,locking the bolt when it is closed) and crank-type bolt retracting (cocking) handle at the right side of the receiver. In M3A1 the designers removed cocking handle assembly (which was source of malfunctions) and replaced it with simple finger hole in the bolt body, accessible through enlarged ejection window. Also, M3A1's could be converted for 9x19mm Luger ammunition by replacing the barrel, bolt, and installing the magazine adaptor to use British STEN magazines.
The retractable stock, made from steel wire, could be used as cleaning rod (when detached),and it also featured a magazine loading tool. The hollow grip of the gun contained asmall oilier, which was necessary as the all-steel gun rusted easily in wet climate.
A special version of the M3A1 was produced for clandestine operations; it featured long, integral silencer.