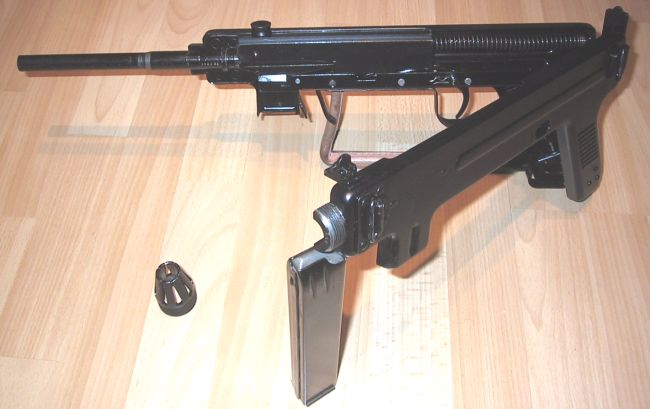 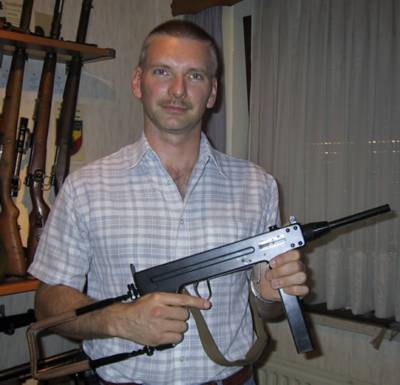 Disassembly images above are made by Frank from Belgium, who owned that particular Madsen. Thanks, Frank!

The famous Danish company Dansk Industrie Syndicat AS ‘Madsen’, usually referred simply as Madsen or DISA, manufactured various weapons since the early 1900s. In 1946 Madsen introduced a modern submachine gun, the m/46, which featured an entirely stamped receiver, integral with pistol grip and magazine housing. This SMG also featured unusual charging handle, a bracket-shaped slider above the receiver. But the most unusual feature of the m/46 was the field stripping procedure. The receiver was made from two halves, left and right, hinged at the rear, and held together at the front by the screw-on barrel nut. To disassemble the gun, one must unscrew the barrel nut, and then open the left side of the receiver/housing. Barrel, bolt, return spring and trigger unit will remain in the right “half” of the gun, easily accessible. The hollow pistol grip contained magazine loading tool, and there wee no manual safeties; instead, Madsen m/46 had an automatic safety in the form of the lever just behind the magazine housing; to fire the gun, one must grasp the magazine and this lever securely by non-firing hand, to be able to release the bolt. Otherwise, the m/46 was a fairy conventional blowback design, which fired only in full auto.
Following the initial sucees of the m/46, DISA introduced the M/50, a slightly modified M/46 with more conventional and comfortable charging handle at the top of the gun, and in 1953 Madsen introduced the last gun in this line, M/53, which differed mostly in that it used a curved magazines instead of straight ones, and can be fitted with optional barrel shroud, which had a bayonet mount lug. The M/53 Mark 2 version differed from all other guns in this line by having a fire mode selector. Madsen SMG’s were sold to various Asian and South American countries. Brazil also manufactured a licensed copy of the Madsen m/50 in .45ACP caliber.