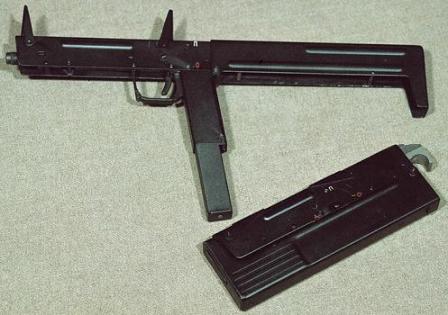 The PP-90 submachine gun represents the abortive attempt to copy the concept (and probably somedesign ideas) from unsuccessful American Ares FMG (Folding Machine Gun) weapon,produced by Ares Defense company in mid-1980s. PP-90 had been developed in early 1990s by KBP design bureau in Tula, otherwise known for highly efficient and successful weapons, from automatic cannons and up to tank and naval guns. Both Ares FMG and its PP-90 clone were intended for concealed carry, and folded down to relatively compact, plain looking metal box. When needed, these guns were to be unfolded into ready to fire position in 3 – 4 seconds. I’m not sure about Ares FMG, but the PP-90 became a failure – resulting design was somewhat unreliable and totally uncomfortable. Initially issued to some police and security forces in Russia, this gun now destined to collect dust in farthest corners of the armory rooms, due its terrible ergonomics and poor handling characteristics.

The PP-90 submachine gun is entirely made from stamped steel, and folds around the point just behind the barrel breech face. PP-90 submachine gun is a blowback operated, automatic only weapon (selective fired in PP-90M1 version). It fired from open bolt, and fed from double stack, double feed magazines. Fixed sights were built into folding bases.