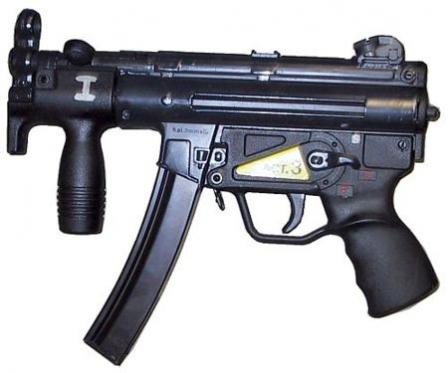 HK MP-5K-PDW – a “Personal Defense Weapon”, with proprietary side-folding buttstock and a three-lug muzzle that can accept quick-detachable MP-5 silencers. 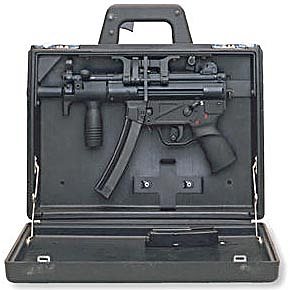 MP5K in the special carrying case.

Click here for the explode view of the MP5K (63Kb JPEG)

The MP-5K compact submachine gun (K stands for “Kurz” in German, that means “short”) had been developed by the German company Heckler-Koch for various counter-terror and security units, that needed a short-range weapon with serious firepower. The HK MP-5K can be easily concealed under the clothes, in the glove compartment of a car, or in the special carry/fire suitcase. It also allows the high mobility in the confined spaces and in the crowd. The price for this features is the short effective range of fire, limited by the short barrel, short sighting line, and the lack of the buttstock. MP-5K is also manufactured under license in Turkey and Iran, and is widely used by various Law Enforcement and VIP protection units worldwide. In the mid-1990s HK developed a derivative of the basic MP-5K, called the HK MP-5K PDW, or Personal Defense Weapon. This weapon is intended for issue to military personnel, who usually is issued with the pistol. MP-5K PDW is much more compact than most of modern submachine guns yet it offers much more firepower than any military pistol. The most limiting factor to the popularity of the MP-5K PDW as the military sidearm is its very limited penetration against personal protection means, like the helmets and body armour. It may, by my opinion, seriously benefit from using the latest Russia-developed 9x19mm Armour Piercing ammunition, which is currently adopted by the Russian Army and the Internal Affairs Ministry of Russia.

Technically,the MP-5K is no more than a shortened HK MP-5 submachine gun, with no stock and with vertical front grip instead of the more conventional forend. MP-5K uses the similar stamped steel receiver and the same plastic detachable trigger units, available for standard MP-5. It also uses the same magazines. The sights on the MP-5K can be of the same pattern as on the MP-5 (hooded post front, drum adjustable diopter rear), or the low-profile non-adjustable fixed sights. The MP-5K PDW differs from the MP-5K by having a plastic side-folding stock (designed and made in the USA by the Choate Machine& Tool Co under the HK USA contract). The other visible difference is the three-lugged barrel, that can accept any silencers, compatible with the standard MP-5. All models of the MP-5K can be fitted with various laser sights and other accessories.

It is interesting to know that during the 1980s HK manufactured a semi-automatic only version of the MP-5K for the civilian market. It was called the SP-89, and visually differed from the MP-5K by the lack of the front grip. The SP-89 has been included in the US 1994 “Assault weapons ban” and is no longer imported to the USA, and, most probably, no longer made.