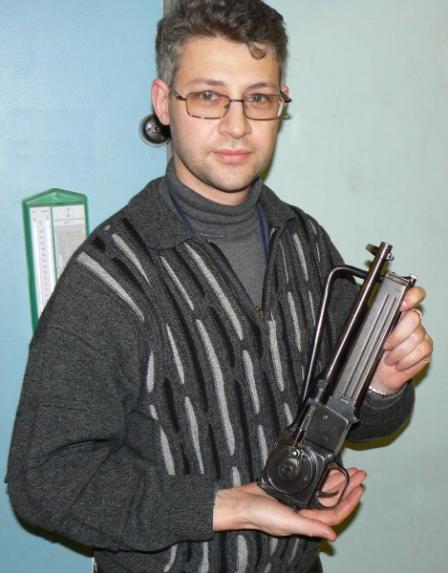 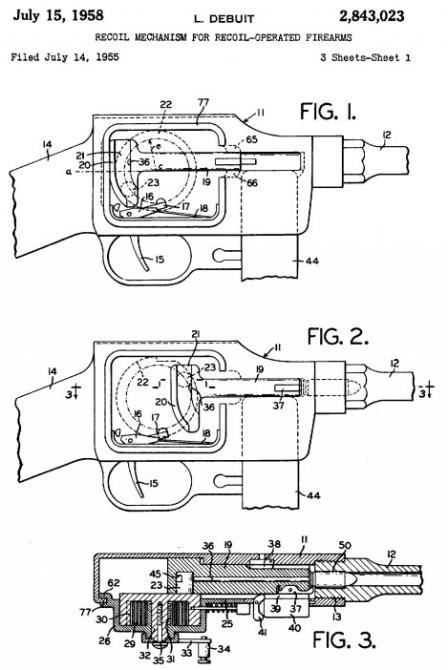 Drawing from original US patent, issued for design of the MGD submachine gun.

The MGD PM-9 submachine gun was developed during late 1940s and early 1950s by frenchman Louis Debuit, who at the time worked for French company Etablissements Merlin & Gerin in Grenoble. The idea behind this unusual and little-known weapon was to provide a compact and easily concealable weapon with low felt recoil. Apparently, the MGD name comes from names of the company (Merlin & Gerin) and name of designer (Debuit). Early prototypes were made in French 7,62×20 Long caliber, but later development switched to 9x19mm caliber weapons. M & G built undisclosed numbers (probably several thousands) of MGD PM-9 submachine guns in several modifications, including versions with fixed or folding stocks, and with standard (short) or quite long (rifle) barrels, all between 1954 and 1955. In about 1956, German arms company Erma Werke tried to produce 9mm MGD PM-9 submachine gun under license from Merlin & Gerin. According to available sources, Erma produced about 10 prototypes of MGD, and then switched to other designs, which were less complicated to make and thus less expensive. Actually, what killed this interesting weapon was it expensive construction, which required a lot of milling and other labor-extensive metal processing. It is not known if these weapons were ever issued to any military or police service, or participated in any military conflicts.
Author was able to examine one of MGD PM-9 submachine guns, and it was surprisingly devoid of any markings, and its history was unknown.

MGD PM-9 submachine gun is deleayed blowback operated weapon which fired selectively in single shots or full automatic mode, from open bolt. The most unusual design solution was very light and compact bolt (breechblock), with additional mass provided by rotating flywheel located in the circular extension on the right side of the receiver. The flywheel was connected to the clockwork-type spring, and had a projection on one side, which entered the vertical cam track, cut in the rear extension of the bolt. To cock the gun, shooter has to rotate flywheel for about 180o counterclockwise (looking from right side of the gun) through the handle which is located on the right side of the gun. Once wlywheel is fully rotated back, it is locked there by the sear. This cocking movement also pulls the bolt back. Upon firing, the pull on the trigger releases the flywheel, and its spring rotates flywheel clockwise, thus pushing the bolt forward, to load the fresh cartridge from magazine and then fire it once the cartridge is fully seated in the chamber. Upon discharge, the rearward movement of the bolt is delayed by inertia of the flywheel, the force and the spring, combined with the leverage, provided by the position of the pin on the flywheel relative to the axis of the flywheel.
Other features of MGD included a folding magazine housing (which received widely available MP38 / MP40 magazines of German origin), and a side-folding stock, made from thick steel wire. The sights were of simple fixed variety, set for 100 meters range.