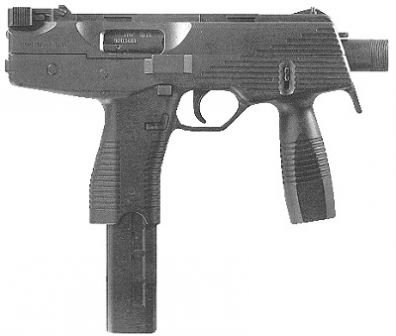 The Steyr TMP is a modern compact machine pistol. It first entered the marketplace in 1993. Blowback operated, it has a locked breech design, with rotating barrel. This means that after the shot, initially the bolt with barrel locked to it move backwards for some 4 millimeters. Then, the barrel rotates clockwise slightly, and this movement is used to unlock the bolt. Rotation is controlled via a small cam on the barrel that follows a spiral groove inside the receiver.

Both upper and lower receiver are made from polymer. The TMP has no stock and could be fired only from an off-hand position. Safeties included automatic off-battery safety, drop safety and manual safety switch. This weapon is reportedly very controllable and comfortable to fire.