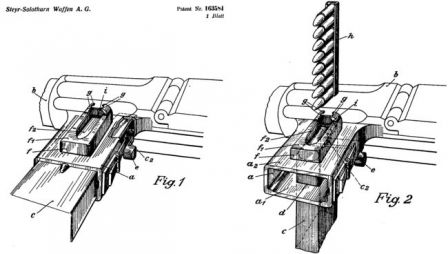 The story of this weapon start in around 1919, when German arms-making company Rheinmetall produced a prototype submachine gun designated MP.19. This weapon was developed by Lous Stange to same specifications as Schmeisser’s MP.18/I, but MP.19 came too late to see any action during WW1. After the end of WW1, Germany was severely limited in design and production of small arms by treaty of Versailles. When Hitler came into power, German military-oriented companies began to move the R&D outside of Germany to avoid treaty limitations. In 1929, Rheinmetall purchased the small Swiss-based company Wafenfabrik Solothurn, which was used to finalize some Rheinmetall small arms which were developed under secrecy in Germany. One of those weapons was an improved version of MP.19 submachine gun, which was announced by Waffenfabrik Solothurn under company index “S1-100”. This was an excellent weapon, reliable, controllable and accurate, but Solothurn company lacked production capabilities. To make guns on industrial scale, Solothurn teamed with famous Austrian gun-making company Waffenfabrik Steyr, and formed trade company Steyr-Solothurn Waffen AG in Zurich, Switzerland. This company sold weapons designed by Rheinmetall and Solothurn and made by Steyr, and S1-100 submachine gun was among first products of this international conglomerated. In the 1930 Austrian police adopts the S1-100 as Steyr MP.30, chambered for standard Austrian 9×23 Steyr pistol cartridge. It was also exported to Chile, Bolivia, Uruguay and El Salvador; it also was sold in limited numbers to China, in 7,63×25 Mauser caliber. Portugal adopted the S1-100 in 7,65×22 Luger caliber in 1938, and in 1942 purchased more S1-100’s from Steyr but this time in 9×19 Luger. For South American markets, Steyr produced version of S1-100 in .45 ACP caliber; this version was distinguished by additional pistol grip under the forearm. Austrian army adopted the S1-100 as Steyr MP.34, chambered for powerful 9×25 Mauser ammunition. When Hitler’s Germany occupied Austria in 1938, it quickly consumed most of Austrian MP.30’s and MP.34’s, and after rebarreling to 9×19 ammunition these weapons were issued to German troops as MP.34 (ö). Production of Steyr-Solothurn submachine guns has ceased in around 1940, when, under German administration, it was replaced in production at Steyr by much simpler and less expensive MP-40 submachine gun of German design. It must be noted that S1-100 was one of the finest submachine guns made prior to WW2, and probably one of most expensive.

Steyr-Solothurn S1-100 submachine gun was blowback operated, selective-fired weapon which fired from open bolt. Unlike most other submachine guns, the return spring was located in the buttstock and was linked to bolt via long push-rod, pivotally attached to the rear of the bolt. The basic action of the gun was accessible through the top cover, which was hinged at the front and opened up and forward to expose bolt and trigger unit below it. The fire mode selector was made in the form of a sliding switch, located at the left side of the stock. Early guns had Schmeisser-style bolt-locking safety in the form of hook-shaped cut which was used to engage the bolt handle when bolt was cocked. Later on, additional manual safety was added to the top cover, in front of the rear sight. this safety locked bolt either in cocked or closed position. The feed was from left side, with magazine housing slightly canted forward for more positive feeding ejection was to the right. The magazine housing had an unusual magazine filler device, with slots for magazine at the bottom and for stripper clip – at the top. Removed magazine was inserted into this device from the bottom, and then shooter placed stripper clips into the top of device and pushed cartridges down into magazine. Four standard 8-round clips were required to fill the magazine.
All S1-100 guns were fitted with wooden stock with semi-pistol grip. Barrel was enclosed into perforated jacket, which had provisions for mounting a bayonet. Sights included hooded front and tangent type rear, marked from 100 to 500 meters. One most unusual accessory, which was briefly advertised for S1-100 during mid-1930s, was a compact machine-gun type tripod, which was to provide additional stability for weapon when firing from ground. It seems that this tripod was never made in quantity.