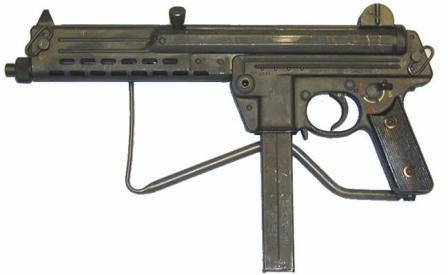 Walther MP series of submachine guns included two similar weapons which differ only in the length of the barrel – the Maschinen Pistole Lang (long submachine gun) or MPL in short, and Maschinen Pistole Kurz (short submachine gun) or MPK. Both weapons were developed during late 1950s and early 1960s, and mass production commenced in 1963. Walther submachine guns were adopted by several German police departments; some export sales also were recorded, the most notable purchase being by Mexican Navy. The sales, however,were not sufficient enough to warrant further production, and manufacture of both versions has ceased in 1983.

Walther MPL and MPK submachine guns are blowback operated, selective fired weapons which fire from open bolt. The bolt is shaped like an inverted”L”, with most of its mass being located above the barrel and in front of the breech face. The bolt rides on a single guide rod. The charging handle is a separate part which does not move when gun is fired. The receiver is made from steel stampings, with the trigger / magazine housing pivotally pinned to its base. The manual safety and fire mode selector are incorporated into one ambidextrous control, made in the form of lever, located on the grip behind the trigger. The shoulder stock is made from steel wire and folds to the right side of the gun.