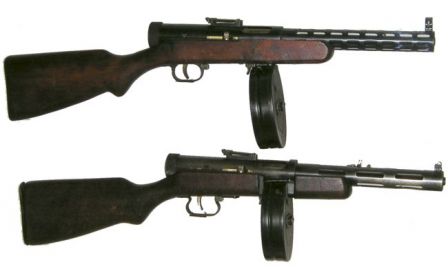 The PPD (Pistolet-Pulemyot Degtyarova)had been developed by famous Russian small arms designer Fedor Degtyarov by1934. It was formally adopted by the Red Army in 1935 and entered limited production as the PPD-34. Made in small numbers, it was mostly relegated for NKVD use, mostly for border guards. Slightly modified in 1938, it was then produced until 1939 in PPD-34/38 variation, with newly developed 71 rounds drum with long neck. After the Winter War experience (1940 war between USSR and Finland), new version of PPD has been rapidly developed, with the most visible change being the two-part stock, cut to accept new pattern of drums, which hadno neck. This became the PPD-40. After the outbreak of the Great Patriotic Warin 1941, it was soon been discovered that the PPD-40 is less than ideal for wartime production, so it was quickly replaced by the more efficient and inexpensive PPSh-41, which appeared in great numbers and was widely used by Red Army.

The PPD-34 was a conventional arm of its period, being greatly inspired by the Bergmann-Schmeisser MP28 submachine gun. All versions of PPD were simple blowback weapons and all fired from open bolt. Machined receiver and vented barre shroud were of round cross-section. PPD were fitted with tangent type rear sights, rather optimistically marked up to 500 meters. Models of 1934 and 1938 vintage had single piece wooden stocks, while last model of 1940 had two piece stock with distinctive cut made for magazine housing. All versions were capable of semi-automatic and full automatic fire. Fire mode selector was located in front of the trigger guard; separate safety was built into the cocking handle and was used to lock the bolt either in cocked or uncocked (forward) position.