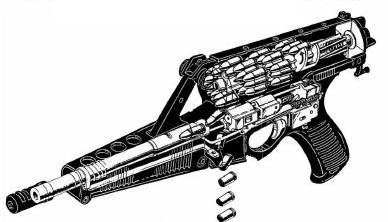 Сut-out drawing of the Calico M950 pistol, showing its general layout and feedsystem. 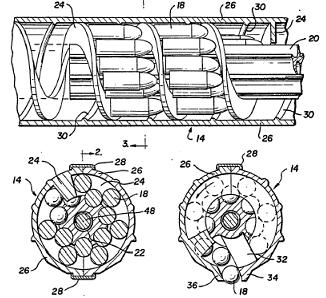 Drawing from original patent, protecting the large-capacity magazine for 9mmCalico firearms (.22LR magazines were of slightly different design and thus wereprotected by another patent).

The Calico submachine guns are somewhat mysterious and quite notorious in both design, concept and appearance. The key properties of Calico firearms were extremely large magazine capacity combined with slim profile and ambidextrous handling. First designs, introduced by the US based company Calico Light Weapon Systems (LWS) circa 1990, were intended for both Law Enforcement and Military markets (in either semi-auto or selective fired form, in 9mm) and for civilian market (semi-auto only, in pistol or carbine form, in 9mm and .22LR versions).Sales of these guns were not so bright, and the US Assault Weapons Ban of 1994,which limited magazine capacity for civilian guns to 10 rounds, further impacted the future of this weapon. Apparently, military and police sales during late1990s were insufficient, and it seems that the Calico LWS company went out of business.

Original design of the helical, large capacity magazine was invented by theMichael Miller and Warren Stockton by the 1985, and refined by the 1988. Calicocompany produced 2 basic designs, one in .22LR (models 100, 105 and 110), and another in 9mm Luger (models 900, 950, 960, Liberty). 9mm models could be easilydistinguished by the ejection chute, located just ahead of the triggerguard, and opened to the bottom. .22LR models, on the other hand, have trigger guards withslim front edge, and ejection ports on the side of receivers.

Technical description.
The 9mm Calico submachine guns were delayed blowback operated, selective fire weapons. The action is based on the two part, roller delayed blowback boltsystem, initially designed by Ludwig Vorgrimler at the Mauser Werke by the end of WW2, and latter refined and promoted by the Heckler & Koch company in itsG3 series rifles and MP5 series submachine guns. One interesting feature ofCalico submachine guns is that the spent cases are ejected straight down,through the ejection chute at the front of the trigger guard. This, along withthe ambidextrous safety / selector switch, located at the front of the triggerguard, make the gun ambidextrous, but bottom ejection caused danger to theshooter in the case of improper two-hands grip – if the supporting hand will come too close to the trigger guard, ejected cases can cause burns and damage tothe holding palm. The charging handle is located at the left side of the gun,just ahead and above the trigger, and does not move when gun is fired. It alsomust be pointed out, that the .22LR versions of the Calico guns had the ejection port at the right side of the receiver, above the pistol grip.

The most interesting feature of the Calico firearms is the top-mounted, cylindrical magazine of impressive capacity. Made mostly of plastics, this magazine containsa helical guide grooves at its "inner" cylindrical wall, with the rotating central "follower", that causes the cartridges to follow thehelical track inside the cylinder. The follower is operated by the spiralspring, located at the rear of the cylinder. Magazine is equipped with windinghandle, so it can be stored loaded and with unwound spring, to avoid loss of spring tension during the storage time. When required, magazine spring could bequickly wound up by rotating the handle to prepare magazine for fire. Magazines for Calico guns can store 50 or 100 rounds in relatively compact packages.

Anotherinteresting feature of all 9mm and some .22LR Calico guns is that while the adjustable front sight is mounted on the trapezoid block on the weapon itself,the rear sight is formed as the part of the plastic magazine shell. Calico firearms in submachine or carbine form could be fitted with retractable butt and/ or forward pistol grip. Calico "pistols" had no butts, but still had short forearms and were fitted with shorter barrels. .22LR semiautomatic versionsalso can be found in either pistol or carbine versions (latter with longer barrels, detachable or under-folding butts and ribbed forends of roundcross-section). Many .22LR guns also were fitted with conical"blaster-like" flash hiders at the muzzle, which also carried the front sight base (rear sight was at the front of the magazine holding block).