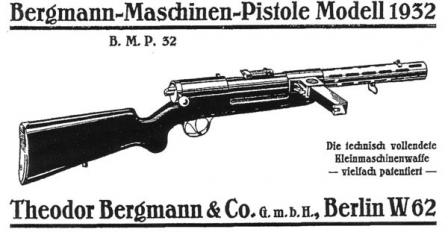 The Bergmann-Maschinen-Pistole or B.M.P. in short was a brainchild ofthe Emil Bergmann, who was the son of the Theodor Bergman, the owner of the gun factory under his own name. First Bergmann M.P. appeared in 1932. At the first glance, the BMP-32 looked much like the Schmeisser MP-28 with inverted position of magazine. On closer examination, however, there were to many differences in design. BMP-32 was more or less a prototype weapon, but Bergmann managed to sell a manufacturing license to Danish company Shulz & Larsen, which produced MP-32 for Danish army, chambered for 9×23 Bergmann ammunition. Over following years, design of the BMP-32 was revised in several ways, and in 1934 Bergmann developed an improved weapon, MP-34 submachine gun. Since manufacturing capabilities of the Bergmann company were limited, the production of Bergman MP-34 was contracted to another German company, Carl Walther, which produced about 2 000 of MP-34 for export and domestic sales. BMP-34 was available in several versions, with standard (200 mm) or long (320 mm) barrels. In mid-1935 Bergmann introduced a simplified and less expensive version of the basic weapon, which was designated as Bergmann MP.35/I. Initial production orders for MP-35 also were placed at Walther, which made about 5000 submachine guns between 1936 and 1940. These guns were ordered by Ethiopia and Sweden, which adopted Bergmann MP as m/39. With the outbreak of World war 2 Walther company concentrated on production of more important weapons, and Bergmann contracted another German company, Junker & Ruh, which produced equipment for German SS forces. During the war, about 40 000 Bergmann submachine guns were produced by Junker, and almost all were supplied to Waffen SS.

Bergmann submachine gun was blowback operated, selective-fired weapon which fired from open bolt. Unusual feature of Bergmann was the cocking handle, which was placed at the rear of the receiver, and was operated the same way as on Mauser bolt-action rifle – that is, shooter had to rotate the bolt handle to the left, pull it all the way back, then push it home and rotate back to horizontal position. When gun was fired, cocking handle remained stationary. On BMP-32 the safety was also made in same position as on the Mauser rifle, that is, at the rear of the bolt. On MP-34 and MP-35 the safety was relocated to the left side of the receiver. The choice of fire mode was made by the pull of the trigger – the short pull resulted in single shots, the long pull resulted in full automatic fire. Feed was from right side of the gun, with ejection to the left. early guns used Schmeisser MP-28-compatible magazines. Barrel was enclosed into tubular jacket with cooling slots and muzzle brake / compensator at the front.