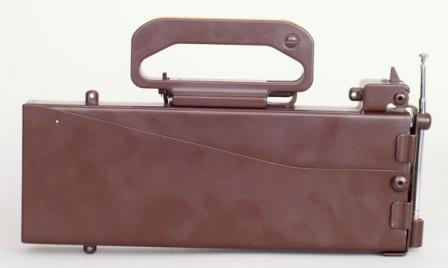 9mm M-21 submachine gun by Dave Boatman was a very close copy of the Ares FMG submachine gun. Shown here in its folded configuration, M-21 is disguised as a portable radio set of the time (mid-1980s).
Image by Oleg Volk 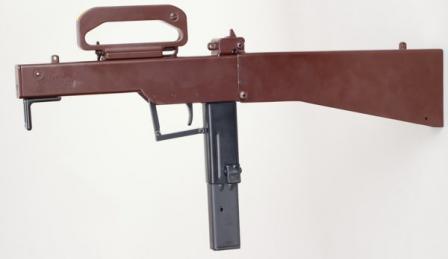 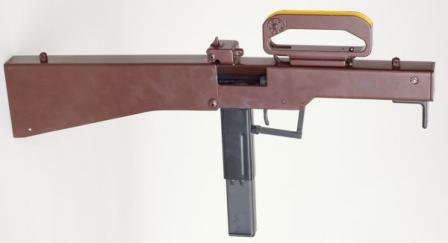 Eugene Stoner (the designer of the M16 rifle and then a mastermind of the innovative arms-making company Ares Inc.) developed an idea of the easily concealable submachine gun in the early 1980s. Following many cases of kidnapping of high-ranking politicians and wealthy businessmen (especially in Western Europe and Latin America), Stoner conceived an idea of the "businessman's personal defence weapon" – an easily concealable firearm that could provide serious firepower at shorter ranges. He then developed a folding submachine gun concept – a firearm that can be folded into an unsuspicially looking package and then quickly unfolded and brought to action when necessary. Stoner patented his design in around 1986, and few prototypes were made by Ares Inc in about the same time. However, complexities of the individual ownership of a fully automatic weapon like submachine gun, as well as other issues caused this project to be shelved. What is more interesting, that in about same time at least one American gunsmith, Dave Boatman, produced very similar weapon and actually marketed it before US Government prohibited further manufacture of fully automatic weapons for civilian consumption in 1986. The actual connections between Stoner's Ares FMG weapon and Boatman's M-21 weapon are unknown, but two submachine guns are almost identical in concept and very close in design details. Furthermore, very similar weapon was produced several years later in Russia as the PP-90. It has been made in limited number but found to be unreliable and awkward to operate, and is entirely unpopular among Russian law enforcement officers.

The Ares FMG is a simple blowback weapon, firing from open bolt. Bolt is telescoped around the barrel, return spring also is located around the barrel, inside the bolt. Receiver is made from stamped steel, and consists of two parts, hinged at the middle of the weapon. Hollow pistol grip is also hinged to the receiver, and hosts the box magazine. Charging handle was located at the bottom in the front of the receiver, and stayed still when gun was fired. It also served as a protection for shooter's supporting hand, to avoid it from slipping forward and toward the muzzle. To fold the weapon, user must push the lock button, located inside bottom-opened rear part of the receiver just behind the pistol grip, then fold the rear part of the receiver down and forward. To unfold the Ares gun, one must push locking buttons at either side of the front part of the receiver, then pull weapon casing open. Boatman's M-21 gun differed in the locking arrangements of folding receiver / casing – it had a single latch, located on the top front section of the receiver next to the hinge point. Another difference between Ares FMG and Boatman's M-21 was in the sights. Ares gun had no sights at all, as it was probably designed as a very close combat weapon. M-21 had sights concealed within detachable carrying handle. M-21 also had removable rear plate with fake telescoped rod antenna, for better imitation of the portable radio unit and as a dust cover that protected inner workings of the weapon when stored or carried in folded configuration. This plate should be removed before gun can be brought from folded to open position. Another difference between Ares FMG and M-21 was that the latter has several sling swivels, and Ares gun had none.