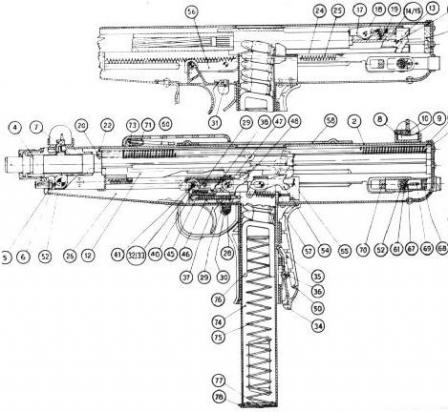 Z-84 submachine gun has been developed in mid-1980s by Star Bonifacio Echeverria SA company of Spain, as a compact, lightweight yet comfortable and powerful weapon. Unlike its predescessors, the Z-62 and Z-70B, Z-84 available only in 9mm Luger/Parabellum (some sources said that it can be orederd in 9 mm Largo, however) and is adopted by some Spanish Army and police units, and also is sold for export.

Z-84 is built to modern standards, having stamped steel, two-piece receiver, with magazine housing built into the pistol grip. The bolwback-operated bolt is of wrap-around type, and when in forward position, it sleeves around the barrel for most part of its lenght. Bolt rides on two guide rails and has significant clearance between its sides and receiver walls, allowing the mechanism to work when seriously fouled inside. Z-84 fires from the open bolt, and has feed system so deigned that it allows for reliable feeding not only of FMJ ammunition, but also Soft-Point and HollowPoint (JSP, JHP) ammunition, used in police operations to achieve better stopping power. Safety switch is located inside the triggerguard, behind the trigger, and locks the trigger when engaged. Separate fire mode selector is located at the left wall of the receiver and allows for single shots or full-auto fire. Z-84 has additional safety features, including “intercepting notches” on the bolt, that used to catch the bolt if charging handle slips from the hand during the chargng cycle. Also, it has special “inertia lock”, that locks the bolt in forward position against hard blows, and is owerridden by the pull of the charging handle. The charging handle itself does not move when gun is fired. Two-position flip-up aperture rear sights are graduated for 100 and 200 meters distance. Folding metallic butt-stock flips up and forward when not in use.

According to some sources, Z-84 is very reliable and quite controllable in full-auto, even when fired off-hands.