Thompson Model 1928A1 submachine gun with 20-round box magazine and Cutts compensator. 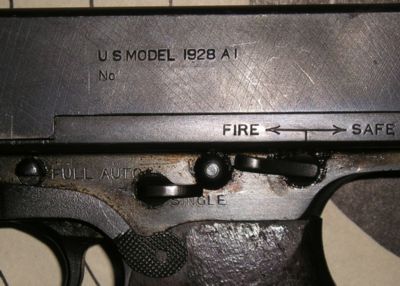 Controls of M1928A1 submachine gun; M1 controls were in same positions but withlevers of simplified shape.

The Thompson submachine gun or “Tommy gun”, was invented by US Colonel John T. Thompson. After retirement, he founded the Auto Ordnance Corp in 1916 with a view to develop an ‘automatic rifle’. His developments in submachine guns began with the purchase of the John Blish patent (1915), that described a specific kind of delayed blowback operation, known as a ‘Blish lock’.

The ‘Blish’ lock was a delayed blowback breech system in which a sloping metal wedge interlocked the breech block with the gun body. Under high pressure, such as when the cartridge fired, the angle of the slope was such that the mating faces jammed solid. As the pressure dropped, the faces were able to slide again and the wedge would continue to move up the slope. This allowed the breech to unlock. This concept was used in all Thompson submachine guns except for the M1 and M1A1 (which were simple blowback operated).

The first Thompson experimental submachine gun appeared in 1919, and the first production model appeared in 1921. It was manufactured under contract by Colt Firearms Manufacturing Co, just as the later M1928 models. Production of the M1928A1 and M1 submachine guns was carried out by Auto-Ordnance and Savage Arms. Some licensed copies were also manufactured by B.S.A. in Great Britain.

There were various versions of Thompson’s submachine gun and some that never reached full-scale production, such as the ‘Military model’ M1923. This version was developed with the intent to extend the effective range out to 600 yards (approximately 550 meters). To achieve this goal, the M1923 was chambered for a special .45 Remington-Thompson round, which fired a heavier 250-grain (16,2 gram) bullet, as opposed to the standard 230-grain .45ACP bullet.

It consequently fired at higher muzzle velocities of about 1450 fps (440m/s). This weapon also had a longer barrel, and came with an optional bipod and bayonet mount. It was tested but never produced in any significant numbers. The other very rare version is the original Model 1927, which was a semi-automatic only version of the Model 1921.

The first Thompson to see military use was the Model 1928, used by the US Navy during its expedition to Nicaragua (1927-32). The so-called “Navy” model 1928 was distinguished by a horizontal forearm that replaced the front grip, and by added sling swivels.

With the start of World War 2, the US Army procured a large number of Model 1928 submachine guns with the ‘Navy’ configuration, designated as US Model 1928A1. These weapons were rather expensive to produce, and in 1942 the army adopted a simplified version of the M1928A1, known as the ‘M1’. The M1 had fixed iron sights and was changed to simple blowback operation.

A little later, an M1A1 version was adopted, which further simplified the design by the adoption of a fixed firing pin, allowing the reduction of several parts. Otherwise M1A1’s were the same as M1’s.

Thomson submachine guns served in the US Army well into the Vietnam era, although in limited numbers. American police used Thompson guns until the 1970’s or 80’s. A few can still be found in the odd police armory worldwide.

These guns were widely exported commercially prior to and after WW2. Many guns were supplied to Britain and the USSR through the Lend-lease program during WW2. It must be noted that Soviet troops generally disliked Tommy guns, because of (in their view) its excessive weight and lack of bullet penetration. That is of course, compared to the Soviet 7.62x25mm submachine guns such as the PPSh-41 or PPS-43.

All Thompson submachine guns fired from an open bolt. The cocking handle was located on the top of the receiver on the 1921 and 1928 models, and on the right side of the receiver on the M1 and M1A1. Separate manual safety and fire mode selector levers were located on the left side of the receiver, above the trigger. The barrel was usually partially finned, and on the model 1928, fitted with a so-called ‘Cutts compensator’ muzzle brake. These were not present on the M1 and M1A1.

Furniture included a pistol grip, detachable wooden shoulder stock and either a detachable forward grip or horizontal forearm. Sights on pre-war models included front blade and protected rear, which combined a fixed open-notch blade and raising diopter, adjustable for both windage and range (up to 500 yards / 460 meters). Wartime models (M1928A1, M1 and M1A1) used a simple fixed aperture (diopter) rear sight, with or without protecting side ‘ears’.

At the present time, Kahr Arms makes a variety of “Tommy-guns” under an Auto Ordnance trade mark. These weapons are limited to semi-automatic fire only and usually have an extended barrel to conform legally in the US.

It is impossible to talk about the “Tommy gun”, without mentioning its more notorious usage. During the prohibition era it saw extensive use by gangsters and police alike, gaining the moniker “the Chicago Typewriter”. It will go down in History as an iconic submachine gun with admirers among Soldiers, Sailors, Police and Gangsters alike.