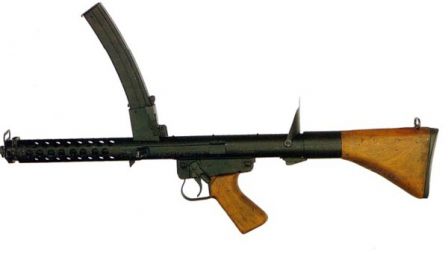 The F1 submachine gun has been designed at the Australian Lithgow Small Arms Factory by 1962. Originally known as X-3 prototype, it appeared in 1962 as possible replacement for obsolete and aging Owen submachine guns. It was adopted as F1 by mid-sixties, and served well until late eighties, when it was officially replaced by the 5.56 mm F88 assault rifle, a license-made version of Steyr AUG. F1 was simple, reliable and popular weapon.

F1 submachine gun is blowback operated, selective fired weapon which fires from open bolt. It uses tubular receiver with top-mounted magazine. Cocking handle is set at the left side of weapon, and does not reciprocate when gun is fired. Its slot is covered by sliding dust cover. Weapon is made in so-called in-line layout, and the front of the buttstock slides over the rear of the receiver, and is fixed there by special catch. For disassembly, gun is unloaded, then catch is pressed and buttstock pulled off the receiver toward the rear; then, bolt and return spring are removed. Sights are of fixed type, and due to top-mounted magazine are offset to the left. Rear sight is made folding for more comfortable carry. Unlike many other submachine guns, F1 can be fitted with standard rifle bayonet, which is attached to the right of the perforated barrel jacket.