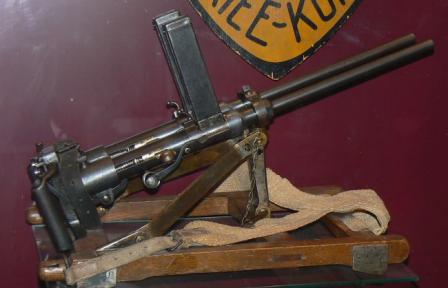 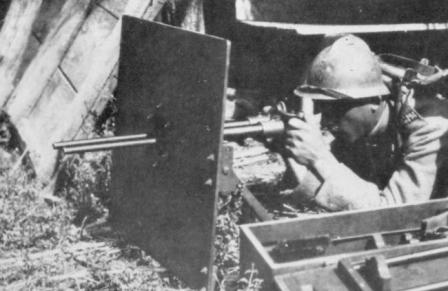 The Villar Perosa submachine gun is one of the most unusual weapons┬Āto emerge┬Āfrom World War 1. The name of the weapon comes from the company that manufactured these guns, the ‘Officine Villar Perosa’ (OVP in short).

This gun was originally designed in 1914 by the famous Italian small arms designer Bethel Abiel Revelli as an aircraft weapon. In this role it found no success, as it was designed to fire only┬Ālow-powered 9mm Glisenti ammunition. The Glisenti 9mm caliber was even weaker than the dimensionally similar 9×19 Luger ammunition.

So because of this, in 1915 the Villar-Perosa was converted for ground applications. That┬Āhappened also┬Āwith the introduction of a variety of mountings,┬Āwhich were┬Ālight tripods or carrying trays. These┬Āwere carried on shoulder straps or put on the ground for a more stable position and┬Āfor less exposure┬Āfrom enemy fire.

The first submachine gun in the world..

Later on, a wooden rifle-type stock was designed for the Villar-Perosa,┬Āto allow it to be fired┬Āmore or less comfortably from the shoulder.┬Ā This┬Āsimple action created the first┬Ā submachine gun in the world.

The Villar Perosa M1915 weapon was assembled from two guns of exactly the same design and appearance, held together by the plate at the front of the receiver and by the twin spade grip assembly at the rear. Each gun has its own trigger, operated by a separate thumb button between the spade grips. The guns themselves used delayed blowback action.

The delay of the initial opening of the bolt was achieved by the rotation of the bolt through the bolt handle that slid against the inclined part of the cocking handle slot. The bolt rotation,┬Āin combination with a┬Āseparate firing pin, provided a safety measure against premature ignition of the cartridge. The firing pin was able to go forward and strike the primer only when bolt was in battery and completely rotated.

After the war, some of the original Villar-Perosa weapons were disassembled into two halves.┬ĀThey were then┬Āput into rifle type stocks, also with the addition of rifle-type triggers.

These guns fired from an open bolt, in full automatic mode only. Due to the lightweight bolt and powerful springs, the rate of fire was excessively high for ground applications, being between 1200 and 1500 rounds┬Āper┬Āeach gun (rising up to 3000 rounds per minute when both guns were fired at once).

The feed was from detachable box magazines, holding just 25 rounds each, so one magazine would last┬Ājust one second of continuous fire. Magazines were inserted into each gun vertically from the top, ejection was from underneath. Sights were located between the guns, with the rear sight being built into the spade grip assembly and the front sight into the front plate that held both guns together.

The OVP M1918 submachine gun was made from a single half of┬Āthe original M1914 twin weapon, with added shoulder stock and a new dual trigger setup. the dual trigger┬Āallowed for single shots (rear trigger) and full automatic fire (front trigger). Cocking of the bolt was achieved by pulling back the knurled sliding sleeve, located around the receiver.

The ammunition feed arrangement was similar to the original twin weapon, with a top-mounted box magazine. The rate of fire was somewhat lower, making this gun somewhat more controllable and more useful in ground combat. A new set of sights was installed, with line of sight necessarily moved to the left to clear the magazine.