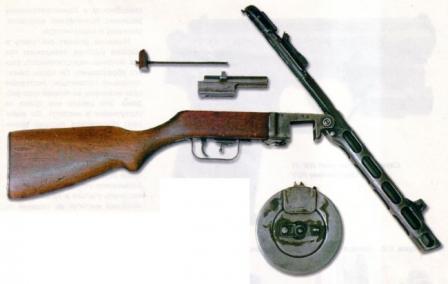 The PPSh-41 (Pistolet Pulemjot Shpagina model of 1941 = Shpagin submachine gun) was one of major infantry weapons of the Soviet troops during the World war 2. Total number ofPPSh's manufactured during WW2 estimates to more than 6 millions. The gun became one of the symbols of the Great Patriotic War. Retired from Soviet Army service soon after the WW2, the PPSh was widely exported to some pro-Soviet countries around the world, including China, Vietnam and many African countries.
It was effective, but somewhat crude weapon, reliable in combat but not without certain flaws. It has somewhat excessive rate of fire, and its drums wereuncomfortable to carry and prone to feed problems once spring is weaken.

The PPSch-41 was designed as a cheap and simple but effective war-time weapon. It featured simple blowback operated action, and fired from open bolt. To decrease the recoil stress, gun was fitted with bolt buffer at the rear of receiver. The buffer was made from fiber and was attached to the return spring guide rod. The striker was permanently fixed to the bolt face. PPSh-41 was a select-fire weapon, with fire selector switch located inside the trigger guard, ahead of trigger. The safety was integrated into the charging handle and locked the bolt in forward or rearward position. The receiver and the barrel shroud was made from stamped steel. The front part of the barrel shroud extends beyond the muzzle and acted as a muzzle brake / muzzle flip compensator. Early PPSch-41's were issued with drum magazines with capacity of 71 round, similar to ones used in PPD-40.
Such high capacity increased the firepower but the magazines were too slow to refill and not too reliable, so in 1942 a curved box magazine was developed. This magazine held 35 rounds and was much more comfortable to carry in pouches. Early magazines were made from 0,5 mm sheet steel and were somewhat unreliable. Later magazines were made from 1 mm steel and were completely satisfactory. Usually, infantrymen carried one drum in the gun and some box magazines in the pouches or pockets.
Early guns featured elevation-adjustable rear sights, marked up to 500 meters;late production guns had flip-type "L"-shaped rear sights marked for 100 and 200 meters range.