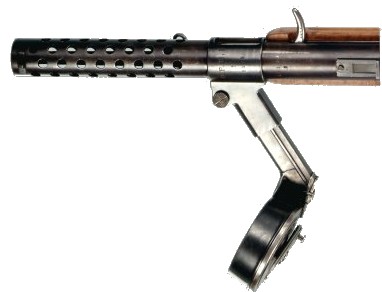 Top view on the original magazine housing and snail drum of MP-18/I.

The Maschinen Pistole Modell 1918, or M.P.18.I in short, was developed by German small arms designer Hugo Schmeisser. The weapon was developed in 1917 on request from Imperial German Army, which required a compact, yet highly effective weapon for short-range fighting in trenches of World War One. Working at the factory of Theodor Bergmann, Schmeisser produced a simple and effective automatic weapon, which fired standard pistol cartridge, P.Patr.08, better known as 9×19 Luger. Early prototypes were tested with double-row box magazines which held 20 rounds, but Army insisted on adoption of a 32-round snail-drum magazine (TM08), originally produced for Luger’s P08 “Parabellum”pistol. This awkward magazine was probably the main drawback of entiresystem, as it was awkward to carry, load and manipulate, and quite unreliable in combat. Nevertheless, at least 30 000 of M.P.18.I submachine guns were builtbefore Armistice in 1918, and at least 10 000 of those reached German troops at the fronts. Soon after the end of WW1, Schmeisser converted his weapon back tomore convenient and reliable box magazines, and this weapon saw limited use by police of Weimar republic.
It must be noted that M.P.18.I is considered as the world’s first practical submachine gun, and it set the pattern for most weapons of its class.

M.P.18.I submachine gun is blowback operated, full automatic only weapon that fired from open bolt. Tubular receiver was attached to the front of the wooden stock, and could be pivoted barrel down for maintenance and disassembly. Magazine is inserted from the left side; early guns had magazine housing sloped back to accommodate TM08 drums; post-war models had straight magazine housings for box magazines. Post-war weapons also accommodated a manual safety, located on the left side of receiver, behind magazine housing. Standard sights consisted of blade front and flip-up rear sight, marked for 100 and 200 meters.