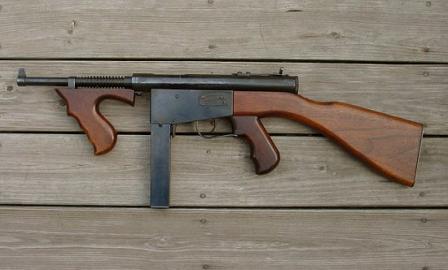 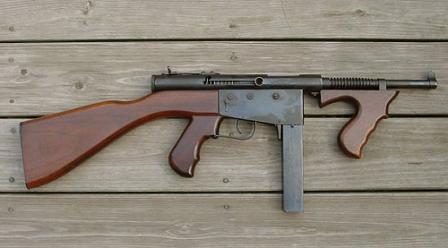 Gordon Ingram designed his first prototype submachine gun during late 1940s; soon after his first prototype he produced next design, known as Model 6. This gun was manufactured by American company Police Ordnance Co between 1949 and 1952; about 15 to 20 thousands of Model 6 submachine guns were made and sold to Cuban Navy, Peruvian Army and some US Police departments. In about 1952 Ingram also designed an improved version of the Model 6, known as Model 7. This weapon was externally similar to Model 6 but fired from closed bolt, and had a separate fire mode selector. Very few Model 7 submachine guns were produced.
Ingram Model 6 submachine guns were produced in two basic configurations, "Military" and "Police". The "Military" version had plain wooden forearm, plain barrel and protected front sight. It also was capable to mount a proprietary spike-shaped bayonet, which was stored inside the forearm in reversed position when not required. "Police" version of Model 6 featured a front foregrip similar to that of Thompson submachine gun, and a partially finned barrel.

Ingram Model 6 submachine gun is blowback operated, selective fired weapon that fired from open bolt. The only safety provided was the locking notch in the cocking handle slot, which was used to lock the bolt by its handle in cocked (retracted) position. Selection of mode of fire was made by the pull of the trigger – short pull produced single shots, and long pull produced full automatic fire.