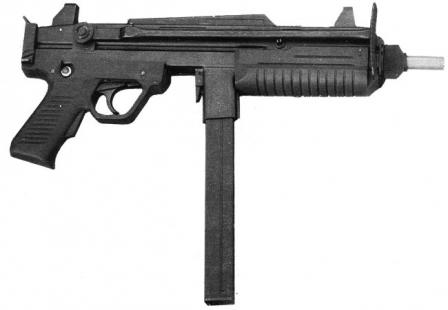 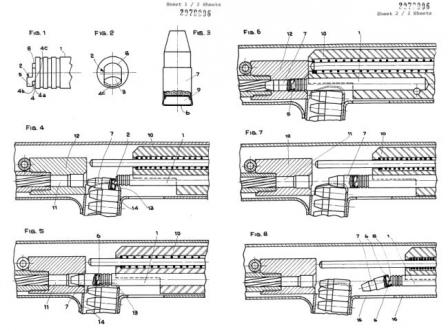 Diagram from British patent (applied for in 1981) for basic bolt and ejection system of Benelli CB-M2 submachine gun.

The Benelli CB-M2 submachine gun was designed by Italian small arms designer Bruno Civolani, who at the time (early 1980s) worked for famous Italian gun-making company Benelli armi. This submachine gun was developed in an attempt to create a weapon that would fire novel "caseless" ammunition. Work on this experimental weapon continued until about 1985, when it was dropped for apparent lack of progress and insufficient benefits, offered by this system over conventional ammunition. in fact, the 9mm AUPO ammunition, as it was known, was not caseless. It has a straight-walled brass case which was formed by extending bullet jacket rearwards. This "case" was permanently attached to the bullet and once fired, left the bore along with it. Case was open from the rear. Powder charge was held in place and protected from elements by hermetic but flammable seal. Ignition charge (priming compound) was located in the internal annular grove around the base of the bullet core (see diagram above).

The Benelli CB-M2 submachine gun utilized more or less standard blowback operation and fired from open bolt, but it also had some peculiar design features. First, to provide necessary obturation (gas seal) at the breech of the barrel, the chamber was bored much deeper than usual, so the bolt head was allowed to enter the rear of the chamber before discharge, blocking the release of the powder gases rearward and into the receiver. Second, as the gun still required some form of extraction and ejection (for example, to clear misfired cartridge), it had an ejection opening at the base of receiver, just behind the magazine port. The bolt head had a patented ejector hook which engaged the inward-facing rim, formed on the cartridge base. Once the ejector retracted the failed cartridge rearwards over the magazine, it can freely fall down and out of the gun through the ejection port. Third, the ignition system featured a special firing pin, which was located above the chamber and moved vertically downward when struck. It reached the wall of the cartridge through the channel, bored in the chamber wall, to hit the priming compound through the cartridge case once the bolt is fully in battery. Gun was equipped with polymer pistol grip and forend, and a top-folding metallic buttstock.