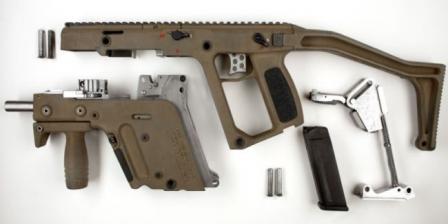 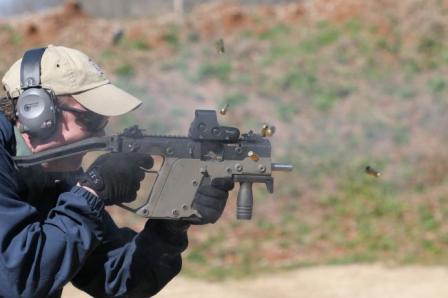 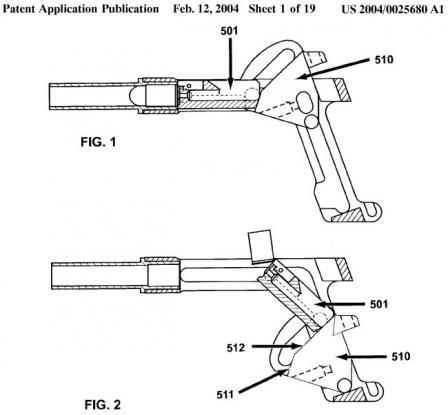 Diagram from US patentapplication which depicts the basic Super V™ action of theKriss submachine gun.

Kriss Super V™ submachine gun is an interesting experimental weapon which is currently (spring 2007) under advanced stages of development. The name Kriss comes from Indonesian sword or large knife with flame-like blade. This weapon is intended to provide operators with improved control over accuracy and bullet dispersion, in both semi-automatic and full automatic modes, while firing hard-hitting .45 ACP ammunition. The overall design also permits the Kriss to be fired single-handedly when required by tactical situations and with adequate accuracy. To achieve those goals, Kriss Super V™ submachine gun employs three basic solutions. First is to place the axis of the recoil force in line with the firing hand, thus minimizing the muzzle climbing. Such system was previously employed in Olympic-class small-bore pistol developed in Russia and was subsequently banned from international ISU competitions because of extremely high accuracy, which made completion "unfair". The second solution is probably more novel, as it uses a laterally moving weight, attached to the breechblock (bolt), to divert recoil forces to the bottom direction. The third solution is actually a part of the second system, and it employs a variable-angle track in the weight (#510 on diagram above), which puts a breechblock at a mechanical disadvantage during earlier stages of recoil, thus slowing down the movement of the bolt while pressure in the barrel is still high. As a result of these measures, Kriss Super V™ submachine gun has significantly less muzzle climb when compared to most modern submachine guns. This results in better accuracy and better grouping of hits on target, providing operators with greater lethality during short-range and short-time encounters.

According to the manufacturer, the Transformational Defense Industries, Inc. (TDI), a wholly-owned US subsidiary of the Gamma Industries (Switzerland), the Super V™ system also can be used for submachine guns in other calibers (i.e. 9mm Luger and .40SW). TDI is also developing civilian-legal semiautomatic carbines with 16" (405 mm) barrels. To date (April 2007) TDI has manufactured four prototypes of the Kriss Super V™ submachine guns, which displayed very promising results during numerous live-fire tests. The development of selective-fired version of Kriss Super V™ weapon is conducted in cooperation with US Army ARDEC and several undisclosed industry partners.

Kriss Super V™ submachine gun is delayed blowback operated, selectively fired submachine gun. It fires from closed bolt for enhanced first-shot accuracy. Fire control group is situated above the barrel. Very light bolt is connected to the vertically sliding weight, which is located within a polymer housing in front of the pistol grip. In one of tested configurations additional Enidine hydraulic buffer assembly is employed to further decrease rate of fire by about 200 rpm and to lower weight of the moving parts. Folding cocking handle is located on the left side of the gun, and does not move when gun is fired. Firing controls include ambidextrous fire mode selector switch, located about the middle of the upper receiver / trigger mechanism housing, which provides full auto fire, 2-round bursts and semi-automatic fie, and a separate ambidextrous manual safety switch, which is conveniently located just above the pistol grip. Feed is from 13-round Glock Model 21 magazines, but a larger capacity, 28-round magazine is currently in development. Magazine is inserted into a housing, located in front of the pistol grip. Kriss Super V™ submachine gun is fitted with two Picatinny type rails, one above the receiver and another below the barrel, and two additional rails can be installed on either side of the lower receiver, providing ample mounting space for all necessary accessories, such as laser-aiming modules or tactical flashlights. The upper rail can accept a variety of sighting devices, such as open or red-dot sights; lower rail is usually fitted with vertical foregrip. On latest prototype, the front of the upper receiver / trigger housing above the barrel is hollow and shaped as to accept tactical flashlight. A side-folding polymer buttstock is provided for more accurate shooting.

Special thanks to Tim Lindsay of Transformational Defense Industries, Inc. (TDI) for information and images.