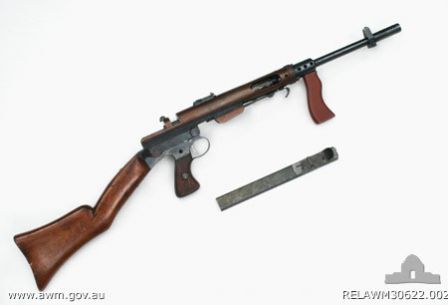 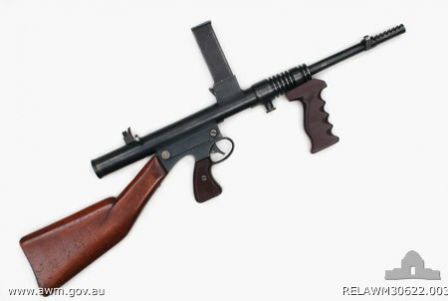 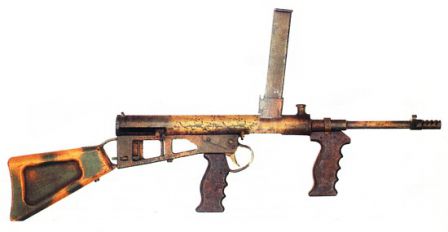 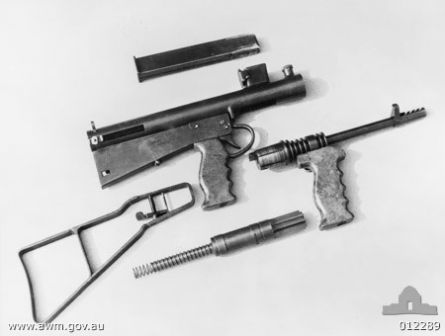 The ‘Owen Gun’ officially called the ‘Owen Machine Carbine’ was invented by Evelyn Owen, an Australian.

He developed his first automatic weapon, chambered for the .22 LR cartridge, by 1939, and offered it to the Australian Army. It was rejected at first. This weapon was a strange looking revolver-type contraption with a difficult to reload, fixed ‘cylinder’ instead of a magazine, and a thumb-operated trigger (!).

By 1940 Owen had produced his next design, in the somewhat more potent (but still relatively mild) .32 ACP / 7.65×17 Browning cartridge. This was a more ‘traditional’ weapon, with a normal trigger, dual pistol grips and detachable box magazine, inserted under the receiver and inclined rearward and to the left.

By 1941, he had produced several more prototypes, chambered in .45 ACP, 9mm Luger and even .38 Special revolver cartridges. This work was done at Lysaghts Newcastle Works in New South Wales, Australia. The 9 mm prototype, made by Lysaghts, was tested against Thompson and Sten submachine guns, and found to be superior to both in terms of reliability in adverse conditions.

Various design features made this gun well suited to Jungle operations. This kind of environment was typical for Aussie soldiers especially during WW2.  Dirt was prevented from entering the receiver by a small bulkhead. The top mounted magazine allowed for better reliability (due to the assistance of gravity) and an unobstructed prone position.

Adopted in 1942, this gun was manufactured until 1945 in three basic versions, Mark 1-42, Mark 1-43 (or Mark 1 Wood butt), and Mark 2. About 45 000 Owen SMGs were made by Lysaghts, and these remained in service with Australian forces until the 1960’s, through World War 2 and the Korean and Vietnam wars. In general, these weapons were well liked by soldiers due to their robustness, reliability and simplicity. The only downside of Owen SMG was its somewhat heavy weight.

Owen submachine guns are blowback operated, top-fed weapons that fired from an open bolt. Receiver is of tubular shape, with the bolt body separated from the cocking handle by the small bulkhead inside. This prevented dirt entering the receiver area through the cocking handle slot, but also required the barrel to be made removable, as the bolt and return spring were pulled forward out of receiver.

The barrel was held in place by a simple latch, located at the front of the receiver, ahead of the magazine housing. The muzzle was equipped with a recoil compensator. Pistol grips were made from wood and the detachable buttstock was made of steel wire on Mk.1-42’s and from wood on later models. Due to the top mounted magazine, fixed sights were offset to the left.