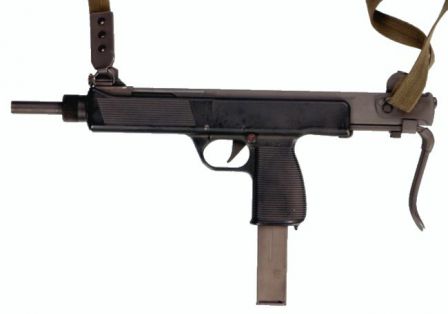 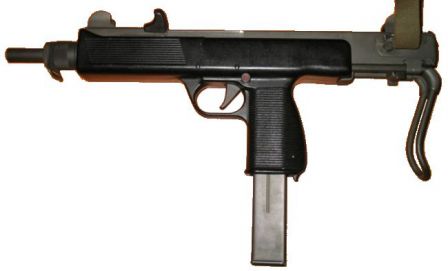 The Steyr MPi 69 submachine gun was developed by Austrian company Steyr-Daimler-Puch during early sixties and put into production; in around 1981 the basic design was slightly improved with addition of a conventional bolt cocking handle. The updated version was designated as MPi 81 and was manufactured until about mid-1990s. Both versions are in use by several police and military forces in Europe and elsewhere.

Steyr MPi 69 submachine gun is a blowback operated, selective fire weapon that fires from open bolt. The receiver is made from stamped steel, the receiver cover and pistol grip are made from nylon. The bolt is of “wrap-around” type (most of its weight is located in front of the breech face, around the barrel) and had a fixed firing pin. The cocking handle on MPi 69 is combined with front sling swivel; to cock the bolt, shooter has to pull the front part of the sling rearward and then release it. On MPi 81 submachine gun, this system is replace by conventional bolt cocking handle. Both MPi 69 and MPi 81 had cross-bolt button manual safety, located above the trigger. The fire mode selection mechanism is a combination of the trigger pull and safety button. If the safety button is pushed all the way to the left, the short pull on the trigger will produce single shots, and the long pull will produce burst firing. If the safety button will be left in mid-way position, only single shots will be possible. If the safety is all the way to the right, the gun is set to safe and will not fire.
Sights consist of protected front and flip-up type rear. The shoulder stock is retractable and made from steel wire.