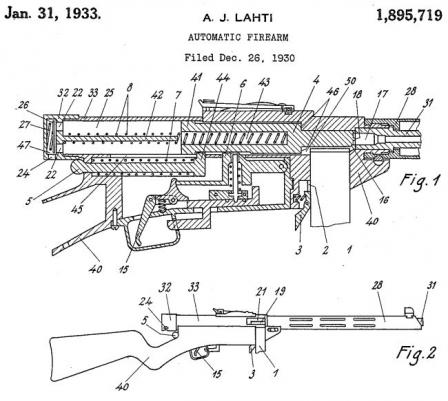 Patent diagrams explaining(left to right) 40- and 71-round drums designed by Lahti and 50-roundbox magazine designed by Schillstrom.

The Suomi ("Finland") submachine gun was developed by Finnish arms designer Aimo Lachti in 1920-1930 period. First prototype was built by 1922, and by 1926 Lahti produced a working weapon, chambered for then-standard Finnish army's 7,65×22 Luger / Parabellum ammunition. Definitive version of the Suomi submachine gun was adopted by Finnish Army in 1931 as Suomi-KP Model 1931, or simply KP-31 (KP stands for Konepistooli – Automatic Pistol in Finnish language). Suomi submachine gun was manufactured by Finnish company Tikkakoski Oy, and licensed to Denmark (Madsen), Sweden (Husqwarna) and Switzerland (Hispano Suiza). Used mostly by Finnish and Sweden armies, it was also widely exported into Baltic countries, some European and South American countries. Suomi was used with great success during Winter War of 1940 against Soviet Union, when, wisely used, this SMG showed to the world the importance of the submachine guns to the modern warfare. Manufacture of the Suomi was ceased in Finland in 1944, but it was used well until the 1990s, when finally rendered obsolete and replaced in Army by assault rifles.

Suomi submachine gun is a blowback operated, selective fire weapon. It fires from the open bolt, and used so called "differential locking" or "advanced primer ignition" principle, when fixed firing pin ignites the primer BEFORE the bolt stops on its way forward into the battery, so the bolt momentum of inertia is used to lock the chamber during the initial phase of shot, when pressure in the chamber is high. The bolt and receiver were machined from high quality steel and bolt was fitted to the receiver almost airtight. The rear cover of the receiver was screwed on to it also almost hermetically. This was necessary to achieve a fire rate reduction by using a simple vacuum valve in the receiver cover – when bolt moved back, the valve let the air out easily from the space behind the bolt. When bolt started to move forward, the valve closed itself, so difference of air pressures behind the bolt and in atmosphere slowed the bolt on its way forward into the battery.
The charging handle was somewhat similar in appearance to one found on bolt action rifles; it is located behind and below the receiver, and does not move when gun was fired. The safety – fire selector is located at the front of triggerguard, and gun could be fired in semi-auto or in full-auto
Another interesting feature was the quick-detachable barrel and barrel jacket. This feature, more adequate to machine guns, was a welcome during intensive fire-fights, when many hundreds of shots were fired in fully automatic mode. Sometimes the barrel was also fitted with machined muzzle brake / compensator.
Suomi was fed from box or drum magazines. Box magazines were conventional staggered-column ones for 20 rounds or twin-staggered-column magazines for 50 rounds each (also known as "Coffin magazines" due to their shape, these could be described as two staggered-column magazines clipped together and having common cartridge exit). Drum magazines held 40 (rarely encountered early versions) or 71 rounds and later inspired Russians to adopt drum magazines for their PPD and PPSch SMGs. In mid-1950s Finnish army also adopted 36-round magazine, designed in Sweden for M/45 Carl Gustaf submachine gun, and Suomi submachine guns were slightly modified to accept those magazines.

In general, the Suomi KP-31 was a highly effective,reliable and accurate gun, but too expensive to manufacture.