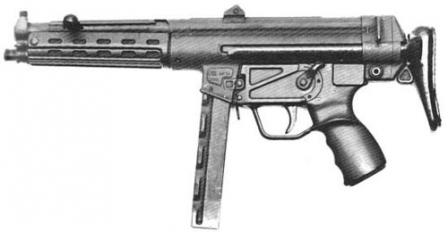 HK MP-54, or HK 54 – a prototype submachine gun (1965). The early MP5A1 adopted by the German police and Border Guard looked the same. Note that the sights and the muzzle are different from the later models. 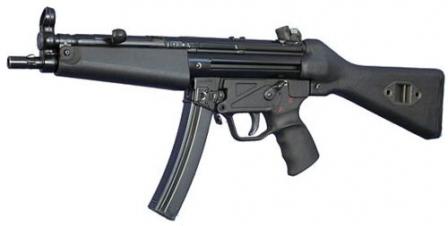 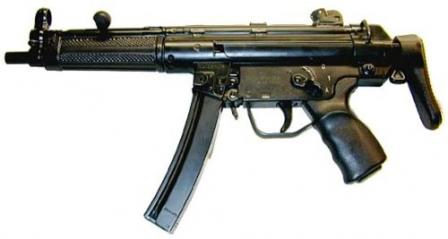 HK MP5SD3. A silenced version with integral suppressor and retractable stock of the A3 version. An early type stamped steel trigger group. 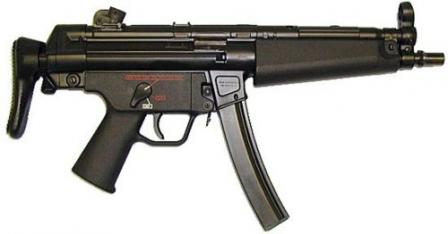 HK MP5N. A modern version developed for the US Navy. Featuring a plastic trigger group of the latest design, with ambidextrous selector lever and “icon” markings. The barrel is threaded to accept US-made detachable sound suppressors, in addition to HK standard three-lug mounts. Retractable buttstock is of the A3 configuration.

The visual difference between trigger units:
left -earliest type stamped steel with plastic grip (converted from the semi-auto only civilian gun HK 94, with American markings on selector);
middle – early type all-plastic with S-E-F markings;
right – most recent all plastic design of the ‘A4’ variation, with additional 3 round burst facility and icon markings. 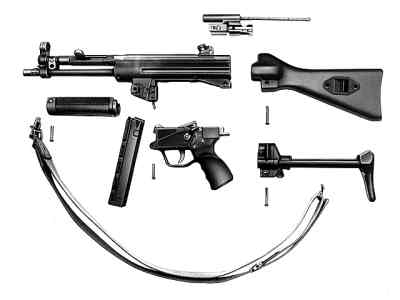 HK MP5 field-stripped. Note that both types of stocks are shown – fixed A2 type and retractable A3 type.

click here for an exploded view of the MP5 (65Kb JPEG)

The Heckler und Koch MP5 submachine gun is perhaps the most famous and widespread firearm of its class to be developed since the Second World War.

Development of the MP5 began circa 1964 under the company designation HK MP-54, or simply HK 54. In 1966, the West German Police and Border Guard (‘Bundesgrenzschutz’) adopted the HK 54, designating it as the MP5. It was originally available in two forms – MP5 with fixed buttstock and MP5A1 with retractable buttstock.

Some years later HK slightly upgraded the design of the MP5, swapping the sights from flip-up open notch rear and blade front to drum-type diopter rear and hooded post front. The muzzle was also changed, the two slot muzzle compensator was changed to a three-lug QD silencer mount without a compensator. Other improvements made over that time concerned the magazines – early magazines were straight box type, later ones were of curved box type for improved reliability.

The trigger units were also upgraded – from original stamped steel with plastic grip to all plastic units, integral with the grip, with various fire modes and markings. Over the years MP5 were adopted by huge numbers of police, security and military forces around the world, including the German police and border guard, British police and elite Army SAS units, American police, FBI, Navy and Marine Corps, and many, many others. MP5 is still manufactured in Germany by Heckler & Koch itself, and also licensed out to Greece, Iran, Pakistan and Mexico.

Can anything rival the MP5?

The only real historical rival to the MP5 in terms of its proliferation across the world, is the famous Israeli UZI submachine gun. Here’s a real head-scratcher.. the German Army (Bundeswehr) did not originally adopt the MP5, probably for economical reasons, and turned instead to Belgian made UZI submachine guns!

The success of the MP5 is outstanding. It’s based on the high quality and reliability of the gun, great single-shot accuracy (thanks to its closed bolt action), great flexibility of use and of course, good marketing. It seems that no other modern SMG at this time can rival the MP5 in popularity as the UZI is not manufactured anymore.

The MP5 is really no more than a scaled-down version of the Heckler & Koch G3 battle rifle. It shares the same basic design, with stamped steel receiver and same roller-delayed blowback action, derived from the post-war CETME rifles, originated by the German designer Ludwig Vorgrimler.

The trigger units on the MP5 are hinged to the receiver and are now available with multiple fire mode options,  including 2 settings (Safe, Semi-auto), 3 settings (Safe, Semi-auto, Full Auto) or 4 (Safe, Semi, Limited burst of 2 or 3 rounds and Full auto). The position levers, ambidextrous or not, are marked with letters, digits or icons. The MP5 is fires only from a closed bolt for improved accuracy, but this does limit the amount of sustained fire available due to barrel overheating problems and resulting cooking-off of rounds in the chamber.

To avoid this, the MP5 cocking handle can be locked in the rear position in a specially purposed slot, allowing the bolt to stay in open position, with no cartridge in the chamber. To commence fire one simply releases the cocking handle from its notch and then pulls the trigger. A special quick-detachable clamp mount allows for the installation of night, optical and red-dot sights if required.

Standard magazine capacity is 30 rounds, but shorter 15 round magazines are available. Special versions were developed and manufactured in limited numbers during the 1980’s-90’s for the US Law Enforcement market, chambered for the more powerful 10mm Auto (10x25mm) or .40S&W (10x22mm) ammunition. These versions can be easily distinguished from the more common 9mm models by straight box 30 round magazines, made of plastic.

While all MP5’s can be fitted with silencers, there is also a dedicated silenced version of the MP5, called MP5SD2 or SD3 (depending on the type of stock). This version is equipped with a non detachable integral sound suppressor and vented barrel, to reduce bullet muzzle velocity down to below the speed of sound. The MP5SD is intended to fire standard 9 mm ammunition, not subsonic rounds.

Semi-automatic only versions of the MP5 were once made for the civilian market under the designation of ‘HK-94’, some with longer, 16 inch (406 mm) barrels, to conform with US laws. There is also a US company, called Special Weapons LLC, that is manufacturing semi-automatic, civilian MP5 clones in various pistol calibers, including .45ACP.