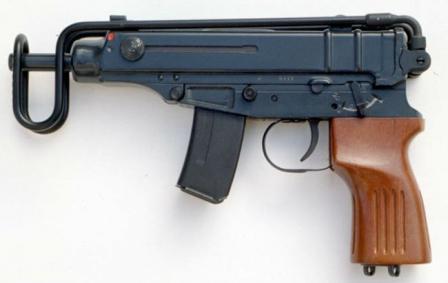 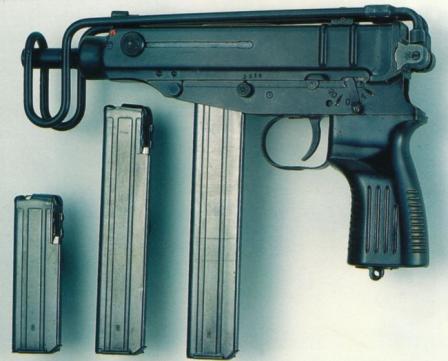 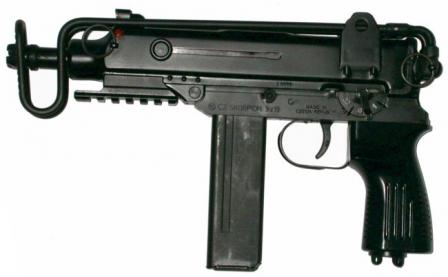 The Scorpion submachine gun is an interesting little weapon which is somewhat hard to classify – is it a machine pistol (a full-automatic weapon for single-hand fire) or a submachine gun (also an automatic weapon, but for shoulder fire). Either way, there are pros and cons. Nevertheless, this weapon deserved its place in history of firearms. Its development was initiated in late 1950s, with intent to provide various non-infantry units with lightweight personal defense weapon that is more effective than a pistol, but is no more obtrusive. Another niche for Scorpion was use by various special forces, because the selected cartridge, known as 7,65×17 Browning / .32 ACP can be easily silenced. First prototypes of a new weapon were built in 1959, and official adoption followed in 1961, under designation of "Samopal Vzor 1961" (submachine gun model of 1961), or SA Vz.61 in short. This weapon was issued to various units in Czechoslovak army, and also widely exported. Licensed version of the Scorpion was produced in Yugoslavia, where it was widely issued as an military officer's sidearm. At least few Scorpions found its way to the hands of various terrorist groups, which favored it for its small size and ease of silencing. It also can be easily fired singe-handedly, like most pistols.
When Czechoslovak army adopted Soviet 9×18 PM pistol cartridge in 1982, the Scorpion was redesigned to accept this bigger and somewhat more powerful ammunition. Export versions of the new model, known in Czechoslovak service as SA Vz.82, were produced in 9×17 Browning / .380 ACP. The last versions of the Scorpion family were produced during early 1990s, and included "military-type" selective-fired SA 391 and "civilian" SA 91s, which was semi-automatic only. Either gun was chambered for 9×19 Luger / Parabellum ammunition. The SA 391 is still being offered to eligible buyers by famous CZ-UB factory.

Scorpion submachine gun is blowback operated weapon, with original rate-reducing mechanism. The rate reducer uses special sear which locks the bolt in the rearward position. A special plunger reciprocates down and up in the channel made within pistol grip. When bolt comes to its rearmost position, it strikes the plunger and then is locked by the sear. Plunger cycles inside its channel, and on its return trips the sear to release the bolt. This produces enough delay to slow down the cyclic rate of fire to reasonable 850 rounds per minute. The firing is controlled by the trigger unit with separate hammer and manual safety / fire selector which permits for single shots and full automatic fire. Cocking handle is made in the form of dual sliders, which are located on both sides of stamped steel upper receiver. The lower receiver, which hosts pistol grip, trigger unit and magazine, is made from machined steel.
Magazines are double stack, and capacity varies depending on the version and caliber (standard capacity is 10 or 20 rounds). Gun is fitted with folding shoulder stock, made from steel wire, and is usually issued with leather pistol-type holster and magazine pouches.