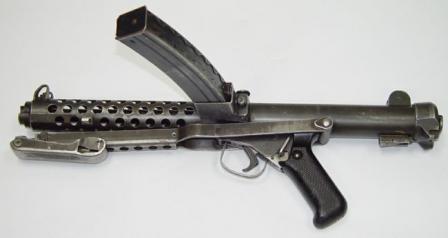 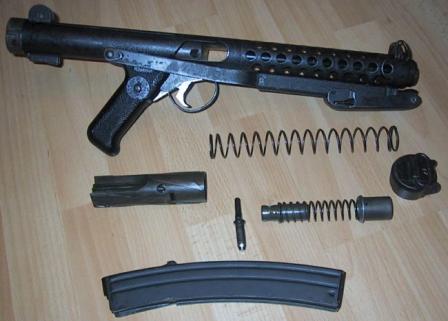 L2A3 /Sterling Mk.4 submachine gun is blowback operated, selective fired weapons that fires from open bolt. The fire mode selector / manual safety lever is located on the left side of trigger unit, above the grip panel. Tubular receiver, which also serves as a barrel jacket at the front, contains a cylindrical bolt with fixed firing pin. Bolt body has several spiral grooves on its outside surface which collect the dust and fouling from inside the receiver, and thus greatly improve reliability of the gun under field conditions. Feeding is from the left side;magazines are inserted horizontally, and ejection is to the right. Magazines are of slightly curved shape for improved feeding reliability. Buttstock is made from stamped steel and folds down and below the receiver to save space. Standard sights include protected front blade and flip-up rear aperture sight, marked for100 and 200 yards range, and also protected from sides by sturdy “ears”.
Special “high power, submachine-gun only” ammunition was procured by British army for Sterling submachine guns. This ammunition was absolutely safe in Sterling submachine guns, but can cause extensive wear to many 9mm pistols designed for commercial 9×19 ammunition.
L34A1 /Sterling Mk.5 silenced submachine gun differed in the barrel section, as its barrel has some 72 small holes used to vent powder gases into the rear expansion chamber of the integral silencer. This was necessary to decrease the muzzle velocity of the bullet so it would be below the speed of sound. Like its predecessor, the STEN Mk.IIS, the silenced Sterling gun was intended to be fired mostly in semi-automatic mode; the full-automatic fire was for emergency purposes only.