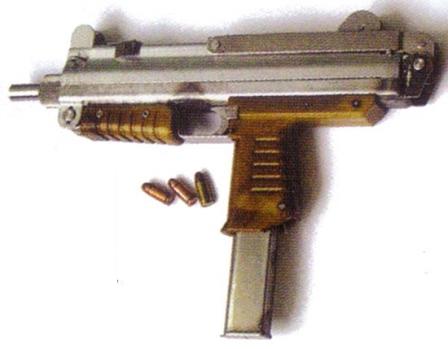 The 7ET9 submachine gun is indevelopment by the state-owned TASCO corporation of Ukraine. Apparently it is based on the unsuccessful prototype Elf-2 submachine gun, developed during mid-1990s by questionable and now-defunct KB-STorganization. Unlike the prototype, the 7ET9 returned to simple design and more or less realistic characteristics. It is fairy typical submachine gun of conventional design; originally developed for more or less obsolete 7.62×25 TTcartridge, it was also developed into 9×19 version, known as 7ET10. According to available information both versions are still not completely developed and neither is being manufactured so far. Very little proven and factual information is available on this design, so description below may have some speculations and assumptions rather than facts.

The 7ET9 is a simple blowback weapon. It uses stamped steel receiver and fires from open bolt. Charging handleis made in the form of dual sliders located at either side of receiver. Magazine is inserted into pistol grip. Submachine gun is fitted with top-folding shoulder stock and folding front grip, which can be dismounted and replaced by forend with integral tactical light or laser pointer. Special silencer could be attached to the barrel. All accessories for 7ET9 are made by the TASCO corporation.