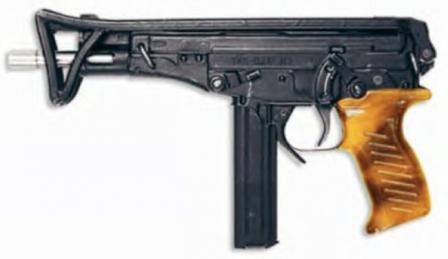 The OTs-02 Kiparis (Cypress) submachine gun had been originally developed by designer Afanasiev during the 1970s on request from Soviet army at the Tula Central Sporting and Hunting Arms Design Bureau (TSKIB SOO). It was originally intended for Spetsnaz use, and had manufacturer designation of TKB-0217. However,at the time the gun was not adopted, and design laid idle until early 1990s, when it was resurrected on request of the Russian Internal Affairs Ministry, as a possible special purpose police weapon. It was adopted in 1995 by MVD and Russian police and issued to various special troops, including OMON and SOBR groups.

The OTs-02 submachine gun is a blowback operated weapon of conventional design. It fires from closed bolt for enhanced accuracy, and thus has a conventional hammer unit. Safety / fire mode selector is located on the left side of the gun and permits for single shots and full automatic fire. Receiver is made from stamped steel, magazines are inserted at the front of the trigger guard. OTs-02 is fed using straight box magazines of 20 or 30 rounds capacity, steel butt folds up at to the front when not in use. OTs-02 can befitted with detachable silencer and laser pointer. Despite the relatively high rate of fire, OTs-2 is claimed to be rather accurate in full automatic fire, and even more so in semi-automatic mode.