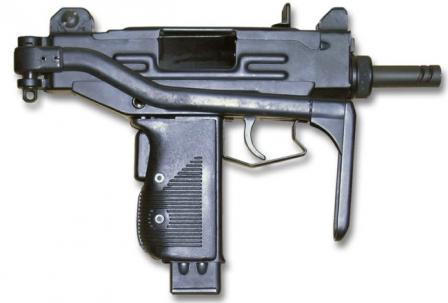 The UZI submachine gun was developed in Israel by designer Uziel Gal in around 1949, and manufactured by IMI (now IWI Ltd) since about 1951. UZI had been adopted by police and military of more than 90 countries, including Israel (now only in reserve), Germany, Belgium. It was also produced under license in Belgium by FN Herstal, and without license – in Croatia. More compact versions, Mini and Micro UZI, which were developed in 1982 and 1983, respectively, are adopted by many police, special operations and security units around the world, including Israeli Isayeret, US Secret Service etc.
An interesting question is the ancestry of the design of Uzi submachine gun.Most sources state that it was inspired by the Czechoslovak SA23 submachine gun, which also had magazine in pistol grip and wrap-aroundbolt. This submachine gun was adopted in 1948, with production commencing in 1949. There are some doubts that it could reach the shores of Israel the sameyear it was born. On the other hand, British army tested several prototype weapons of the same basic layout as early as 1944 (see MCEM-2), and it is possible that Uziel Gal had learned about this layout from UK. It is also possible that he “invented” this layout on his own – after all, the very same basic layout has been used in semi-automatic pistols for a good 50 years.

The UZI submachine gun is blowback operated weapon which fires from open bolt. Mini- and Micro-Uzi submachine guns are produced either in open-bolt or closed-bolt versions; in the latter variation, weapon is equipped with separate striker and additional spring. The receiver is made from stamped steel, with trigger unit and pistol grip pinned to its bottom at the center. The bolt is of “wrap-around” type, with most of its weight located in front of the breech face. The Micro-Uzi has an additional weight, made from tungsten, attached to the bolt, to slightly slowdown the overly excessive rate of fire. The cocking handle is located at the to pof the receiver cover, and does not move when gun is fired; the cocking handle slot is covered by sliding dust cover. Bolt handle is cut at the middle to provide a sighting channel. Gun is fitted with manual safety /fire selector, located on the left side of the grip, plus automatic grip safety at the rear. Full-size Uzi submachine guns were fitted either with a detachable wooden shoulder stock, or with under folding metallic shoulder stock of indigenous design. More compact Mini-Uzi and Micro-Uzi are fitted with side-folding metallic buttstocks made from steel.