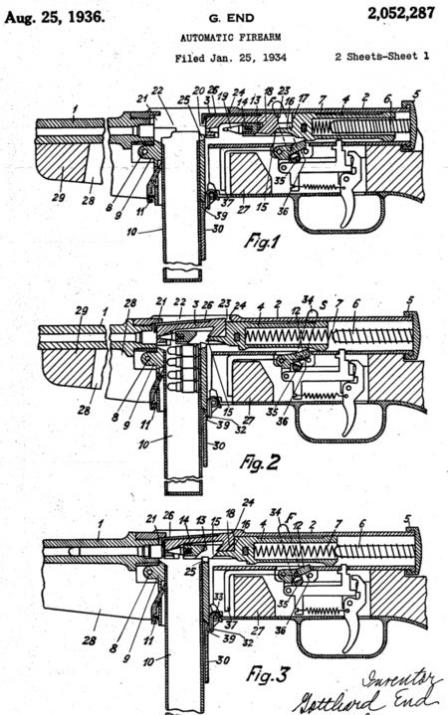 The MKMS submachine gun was developed by Schweizerishe Industrie-Gesellshaft (SIG) company in Neuhausen during early thirties, and first introduced in 1933. It was a military-type weapon in which designers sought to increase infantry firepower by using long barrels (about 2 times longer than in most contemporary submachine guns) and large capacity magazines. To achieve this goal designers had to use a delayed blowback action which kept the cartridge within the chamber long enough for bullet to leave long barrel. To make weapon more comfortable during transportation and non-combat movement, yet ready for action, designers also used for a first time a folding magazine housing, so the long magazine could be stored horizontally within the rifle-type stock below the barrel, and then brought into action simply py pressing the release button, which dropped magazine to vertical position. The resulting weapon was quite long, and thus SIG also produced a short-barreled police version, known as MKPS. Both MKMS and MKPS submachine guns were somewhat complicated and made to extremely high standards, so the price was high and sales were low. Thus, in 1935 SIG designers simplified both weapons by using simple blowback action with one-piece bolt. These guns were designated MKMO and MKPO respectively, but despite simplification, sales were still low so production was brought to an end in late thirties, with some 1,200 submachine guns of all four versions made in total. Few of those submachine guns were sold to certain Swiss police departments, as well as to Finland and Vatican state (used by Swiss guards in 9×19 caliber).

The SIG MKMS submachine gun used indigenous delayed blowback action with two-part bolt, designed by Gottard End. In this system, the bolt body was allowed to recoil for a very short distance after discharge, after which it was arrested by striking the rear edge of the ejection port in receiver. The rear part of the bolt was allowed to recoil freely under the inertia, providing necessary delay for bolt opening. After certain distance of recoil, the rear part of the bolt strike the bolt body, unlocking it from the receiver by tipping down its rear end through inclined surfaces machined to both parts. Once unlocked, the two-part bolt group is free to recoil and cycle the action. Upon closure of the bolt, the rear part of the bolt forces the front part to tip its rear end up and make it ready for locking after next discharge. Firing was from the open bolt, with fire mode (single shots or full automatic) being selected by the pull of the trigger (short pull for single shots, lomg pull for automatic fire). MKMO and MKPO submachine guns featured simple blowback action and also fired from open bolt Manual safety was located on the left side of receiver. Feed was from box magazines, which were inserted into folding magazine housing that has integral dust covers to protect the inner workings when magazine is folded forward for march. Stock of the gun is made from wood and represents the rifle or carbine, sights are adjustable and rather optimistically marked from 100 to 1000 meters.