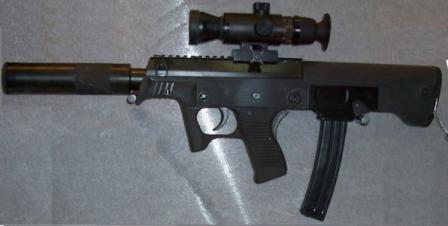 The Type 05 submachine gun (also known as QCQ-05 submachine gun) is the join development of the PLA’s 208 Research Institute and Jian She Group. This design won the Compact Submachine gun trialsinitiated by PLA in early 1990s, and is intended to replace earlier weapons in service with PLA, such as Type 85 silenced submachine gun. Externally resembling the new Chinese assault rifle, the QBZ-95,the Type 05 submachine gun is much simpler design internally. For military use it is produced in the new Chinese 5.8mm caliber, chambered for 5.8×21 DAP92-5.8 cartridge,which is loaded with pointed, armor piercing bullets; subsonic loadings also available for use with detachable silencer. For police use and commercial export sales, Jian She Group also produced a 9mm version of the Type 05, originally known as JS submachine gun, and ow available as CS/LS2 submachine gun. This weapon is similar in design to its military brother but uses standard Picatinny rail instead of carrying handle, and also uses commonly available 9mm magazines compatible with famous German HK MP5 submachine gun.

Type 05 / QCQ-05 submachine gun is blowback operated weapon that fires from open bolt. Gun is made in bullpup configuration, with compact aluminium receiver and separate polymer shoulder stock / housing and pistol grip/ trigger units. Safety / fire mode selector switch is located above the pistol grip, and allows for single shots, 3-round bursts and full automatic fire;charging handle is located at the top of the receiver, inside the carrying handle on Type 05 submachine guns, and on the right side on the JS 9mm submachine gun. Both weapons also fitted with automated grip safety. Despite the bullpup design, ejection is possible only to the right side, so firing from the left shoulder is seems to be impossible or art least dangerous for the shooter.Type 05 submachine guns are fitted with open sights and with proprietary scope mounts at the top of carrying handle; JS submachine guns have no open sights and fitted with Picatinny rail at the top of the receiver which can accept various types of sighting equipment. Either weapon can be equipped with detachable optional silencer. Military issue Type 05 submachine guns are fed from proprietary four-row box magazines that hold 50 rounds of 5.8mm ammunition; CS/LS2 submachine guns use two-row 30-round box magazines compatible with HK MP5.

Special thanks to Timothy Yan for detailed information on this weapon.