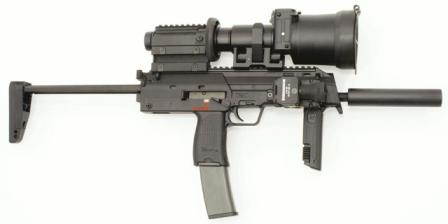 The HK MP7 Personal Defense Weapon (PDW) is a member of a relatively new class of small arms, called Personal Defense Weapons (PDW; such specialized weapons are build since the start ofWW2). The PDW are intended, as name implies, to be a defensive sidearm for second-line troops, vehicle crews and other military personnel who normally not issued with assault rifles. Previously, these troops were issued with pistols or submachine guns, but proliferation of bodyarmor in recent years made those guns ineffective. The first firearm, intended as “the new age PDW” and offered in that class was Belgian-made FNP90, and it had special low-impulse, high-velocity ammunition, capable of penetration of current military bodyarmor and helmets at ranges of 100 meters and beyond, while being much smaller and lighter, than assault rifle. The HK MP7, originally known simply as HK PDW, is another entry in the PDW class, and thus is a direct rival to FN P90.

The HK MP7, first announced in 2000, entered production in 2001 and, by early 2007, is officially adopted by German military, as well as some German special police units, such as KSK, and also offered for export sales. The British Military Police issues HK MP7A1 to its personnel since 2005, and itis believed that some South Korean special forces also use MP7A1.

The HK MP7 submachine gun / personal defense weapon has layout of a typical compact submachine gun (or a large pistol), with magazine being inserted into pistol grip, with folding forward grip and telescoped buttstock. The action of the MP7A1 is somewhat unusual for weapon of such small size, since it is gas operated, rotating bolt design, which strongly resembles the action of the  HK G36 assault rifle, suitably scaled down. The ambidextrous fire mode selector/safety switch allows for semi-auto and full-auto modes. MP7A1it designed to fire special, high velocity ammunition, 4.6×30 mm, that looks like scaled down rifle round. That ammunition is unique to the MP7 and another HK weapon, the HK UCP / P46 pistol.
The receiver of MP7A1, along with integral pistol grip, is made from the polymer with steel reinforcements.Top side of the receiver hosts a Picatinny-type accessory rail for sight mountings. Standard sighting equipment is usually a set of low-profile open sights on quick-detachable mounts, plus a collimating (red-dot) sight Additional rails can be installed on either side of receiver, next to its frontend.  The MP7A1 could be fired single-handedly, or using both hands, either like the pistol or using a front grip. Telescopic buttstock can be extended to give additional stability. With buttstock and front grip are collapsed, the MP7 can be carried like any big pistol in the special holster, and can be effectively used in close combat.

The 4.6×30 mm ammunition is loaded with pointed all-steel bullets with brass jacket. Bullet weight is 1.6 gram (25 grains) and the muzzle velocity is 725 m/s (ca. 2400 fps). Manufacturer claims the 100% penetration of the CRISAT bodyarmor (1.6 mm of Titanium plus 20 layers of Kevlar) at the distance of 200 meters. Other types of ammunition, including tracer, frangible, spoon-tip (rapid-tumbling for use against unarmored human targets), blank and trill (inert) also available for MP7A1; ammunition is currently manufactured in UK by BAE Systems / Radway Green plant.